According to Countryaah.com, with capital city of Harare, Zimbabwe is a country located in Eastern Africa with total population of 14,862,935. 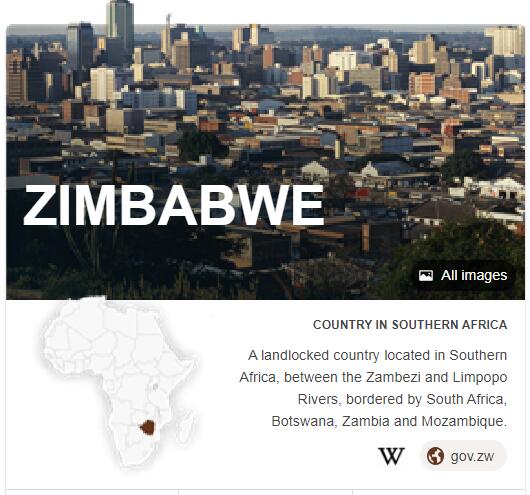 Since independence in 1980, Zimbabwe has, according to the constitution, been a democratic, parliamentary republic. However, the country has since been ruled by ZANU-PF and functioned as a one-party state that seriously violated civil rights. The party and the country were led by Robert Mugabe until the fall of 2017, when he was forced to step down in favor of Emmerson Mnangagwa. See ABBREVIATIONFINDER for how ZW can stand for Zimbabwe.

Zimbabwe’s first constitution as an independent country was adopted in 1980 and was a compromise between Britain and the liberation movement. The constitution guaranteed a multi-party system but introduced a special quota for whites for ten years, which meant that 20 of the 100 parliamentary mandates acceded to them. The law also prohibited confiscation of land without compensation. When the Constitution was revised in 1987, the white quota was abolished to Parliament.

The post of prime minister was also abolished and the role of head of government transferred to the president, which meant that Mugabe, the prime minister since 1980, took over the presidency. The violent situation that arose since the opposition party Movement for Democratic Change (MDC) won the parliamentary elections in 2008 finally led to a power-sharing agreement. The post of Prime Minister was reintroduced during a transitional period and went to MDC leader Morgan Tsvangirai.

A proposal for a new constitution was approved in a 2013 referendum. The president, who again became head of government and commander-in-chief, is elected in direct elections for a term of five years and can be re-elected. The legislative power lies with Parliament, which consists of two chambers (1989–2005 there was only one chamber): the Senate and the National Assembly, both with a five-year term.

Of the 80 members of the Senate, 60 are elected in general elections, 16 are chiefs appointed by regional assemblies, two represent the country’s disabled and two seats are reserved for chairman and vice-chairman of the National Chiefs Council. The National Assembly has 270 members. 210 of these are elected by majority vote in one-man constituencies while 60 are reserved for women (six representatives from each of the country’s ten provinces). The total number of women after the 2013 elections was 85.

ZANU (Zimbabwe African National Union) and its leader Robert Mugabe have dominated the country’s political scene during independence and both won big in the last elections, held in 2013. A few years before independence, ZANU entered into a tactical alliance with the other movement from the liberation struggle, Zimbabwe African People’s Union (ZAPU) under Joshua Nkomo. The Alliance was named Patriotic Front (PF). Following the negotiations for a new constitution in the autumn of 1979, PF dissolved in ZANU-PFand ZAPU-PF. ZAPU-PF became the only credible opposition, but in 1987 after the war in Matabeleland was forced to join ZANU-PF. For a decade, there was hardly any political opposition. Radio and TV were controlled by ZANU-PF and the few independent newspapers were threatened by censorship and distribution bans. However, an autonomous civil society emerged, and the judiciary was strikingly independent for a long time.

In the mid-1990s, the economy deteriorated significantly. The trade union association Zimbabwe Federation of Trade Unions (ZFTU) was at the forefront of the protests against the deterioration. A new party, Movement for Democratic Change (MDC), under the trade union leader Morgan Tsvangirai was founded in 1999. During the 2000s, MDC seriously threatened ZANU-PF’s position of power.

None of the elections held during the 2000s could be described as free and fair. The regime has systematically abused its position and has used cheating, violence and threats of violence to influence election results and turnout. Prior to the 2002 presidential election, all Zimbabweans abroad (between 2 and 3 million) were deprived of their voting rights. In 2005, the Public Order and Security Act (POSA) was used to prohibit several of MDC’s elections.

The political violence escalated in 2008 when the opposition – two factions of the MDC – received more seats than ZANU-PF in the parliamentary elections and Tsvangirai in the presidential elections received more votes than Mugabe. One week before the second round, which was demanded because none of the candidates got an absolute majority, Tsvangirai withdrew from the election. The reason was a marked increase in political violence directed at MDC’s supporters with around 200 dead and Mugabe’s statement that only God can set him apart. In the second round, Mugabe received over 90 percent of the vote, but the turnout was only about 20 percent.

The years 2008-13 represented a political exception period when the MDC factions, of which the largest (MDC-T) is led by Tsvangirai, and ZANU-PF formed a national unity government with Tsvangirai as prime minister. The cooperation worked far from satisfactory and regime opponents have also subsequently been subjected to violence and harassment. However, Mugabe and Tsvangirai agreed on a new constitution that was approved in a 2013 referendum. In July of that year, presidential and parliamentary elections were held. Mugabe and ZANU-PF won big but were also accused of serious irregularities.

Zimbabwe’s domestic policy during the 2000s was largely dominated by land issues, that is, the transfer of land from white farmers with large land areas to black formerly landless peasants. Frustrated that the reform had gone too slowly, war veterans and unemployed youth began to occupy farms by often violent methods in 2000. The occupations received Mugabe’s open support, but land reform, which was also implemented through, among other things, forced redemption of land, caused the collapse of commercial agriculture. This in turn led to food shortages in a country that was previously a major agricultural producer. In 2001, as an Africanization method, occupations of domestic and foreign companies owned by whites were also initiated.

The EU introduced limited “smart sanctions” in 2002, which banned the political leaders of Zimbabwe from entering the EU. The US introduced a similar list that in 2008 included 200 Zimbabweans. The EU has later removed most of the people on the sanctions list, but sanctions remain against Robert Mugabe, his wife Grace Mugabe (born 1965) and the state arms manufacturer Zimbabwe Defense Industries.

After the 2002 elections, Zimbabwe was excluded from the Commonwealth. Zimbabwe has sought new alliances with China, among others. Together with Namibia and Angola, Zimbabwe in 1998 sent troops to Congo (Kinshasa) to support President Laurent Kabila.

Foreign policy Zimbabwe participates in SADC cooperation in southern Africa and in the African Union.

During the 10th century, the domestic political situation was marked by speculation as to who would succeed the aged Robert Mugabe. The power struggle within the ruling party was at times fierce and in 2014, Vice President Joice Mujuru (born 1955) was dismissed, hitherto seen as a possible heir, and the following year she was excluded from ZANU-PF. In 2016, the Mujuru party formed Zimbabwe People First (ZPF), which the following year changed its name to the National People’s Party (NPP).

Mugabe’s position of power rests largely on the support of war veterans, but dissatisfaction with the dictator’s rule and widespread corruption also grew among them. The turning point came when the country’s vice president and Mugabe’s employees ever since the liberation struggle, Emmerson Mnangagwa, was dismissed in November 2017.

Mnangagwa had been seen as a likely successor to Mugabe and the decision to fire him was considered to favor the president’s wife Grace Mugabe, who also claimed to succeed her husband after his death or resignation. Mnangagwa has great support from the defense force, and just over a week after he was fired, the military took control of a number of state institutions. Mugabe was placed under house arrest and his wife was also exonerated.

ZANU-PF dismissed Mugabe as party leader and appointed Mnangagwa instead. Mugabe tried to cling to the presidential post but resigned following threats of national law on November 21, 2017. Mnangagwa, who has moved to South Africa, returned to his home country and was sworn in on November 24 as Zimbabwe’s second president.

Mnangagwa was challenged in the 2018 election by the new MDC leader Nelson Chamisa (born 1978), who succeeded the deceased Tsvangirai. The president secured the electoral victory already in the first round, when he received 50.8 percent of the vote. ZANU-PF also triumphed in the parliamentary elections and captured 145 of 210 the electoral seats in the National Assembly and 35 out of 60 electoral seats in the Senate against 63 and 24 respectively for the MDC. Chamisa and MDC accused the regime of electoral fraud, but the appeal was rejected by the Supreme Court.

The legal system in Zimbabwe is based mainly on Roman law as it was produced by classical Dutch writers (Roman-Dutch law), English law, domestic law and local customary law. The highest courts are the High Court and the Supreme Court. The death penalty can be punished for some serious crimes.

Since independence in 1980, Zimbabwe has been controlled by Robert Mugabe’s authoritarian regime. With the help of security forces, the political process in the country is controlled and manipulated, effectively counteracting the citizens’ right to choose their government.

Opposition members and activists in civil society are at great risk of being subjected to torture and arrests. Reports also show that members of NGOs have been arrested, imprisoned and prosecuted on loose grounds. Long awaiting trial, denial of bail and inadequate access to legal representatives are other major problems. New or amended laws to increase respect for human rights in accordance with the Constitution have been discussed but have not yet been implemented.

Although the Constitution itself prohibits torture and other cruel, inhuman or degrading treatment, such methods are used by security forces and police. The impunity is widespread for security forces, police and government officials.

In Reporters Without Borders Press Freedom Index for 2015, the country is ranked 130 out of 180 documented states, that is, among those states with alarming deficiencies in respect for freedom of the press and opinion. News media practice self-censorship is common as the risk of threats and prosecution is imminent.