According to Countryaah.com, with capital city of Lusaka, Zambia is a country located in Eastern Africa with total population of 18,383,966. 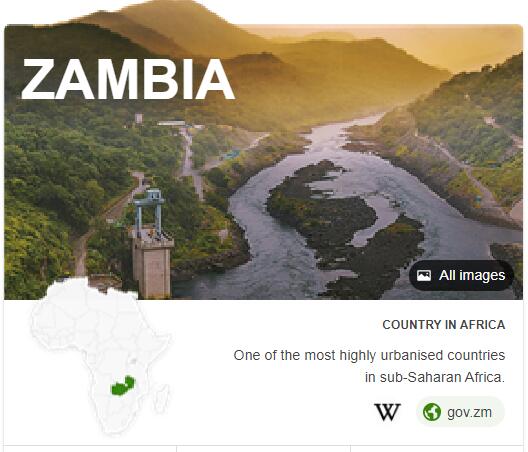 Following the 1996 Constitution, Zambia is a democratic, presidential and unified state republic. The head of state, the president, is elected in the general election for five years; the same person can only be selected twice. The President appoints the Vice President and the Government from among the members of the National Assembly. Legislative authority has been added to the National Assembly. It has 159 members, nine appointed and 150 elected for five years in the general election. The Assembly is elected simultaneously with the President. There is also a separate chieftain’s house, consisting of 27 members, who can process and comment on bills but do not block them.

Administratively, Zambia is divided into nine provinces and these again into 55 districts. See ABBREVIATIONFINDER for how ZA can stand for Zambia. The provinces are governed by deputy ministers in the government, an expression of how centralized the government is. In the districts is the council of choice. In the cities of Lusaka, Ndola and Kitwe, the councils of the elected councils are mayors. The traditional power structures are reflected in the chieftain’s house, where members come from the nine provinces.

The judiciary is built on the basis of English common law, but has gradually gained a more national Zambian feel. The courts have traditionally been relatively independent. The Supreme Court is the Supreme Court. It includes a Justice and four other judges. Central is also a court of appeal, which is essentially a court of appeal. Furthermore, the judiciary comprises three classes of magistrate courts, the classes being defined according to the seriousness or importance of the cases. The judges of the supreme courts are appointed by the president (except for the Justice on a proposal from the Judicial Service Commission), to the lower courts of the Judicial Service Commission.

The political life of the country was dominated for about thirty years by K. Kaunda, the socialist and pan-African leader who in 1964 had brought Zambia to independence and in 1972 had transformed it into a one-party state. Kaunda was supported for many years by a solid consensus, also due to his reputation as an uncompromising supporter of the liberation movements, born in the neighboring racist regimes of Southern Rhodesia and South Africa, and his United National Independence Party (UNIP), founded in 1959, had managed over time to absorb a large part of the opposition, without however eliminating it completely. At the beginning of the Eighties a complex economic and political crisis hit the country and overwhelmed its traditional structures, leading to the reintroduction of the multi-party system and the departure of Kaunda, after the clear defeat suffered in the presidential elections of 1991. The nineties were characterized, on the one hand, by the difficulties encountered in the democratization process, despite the stability in the management of government guaranteed by the continuity of the presidency of F. Chiluba, and on the other, by the persistence of an economic situation marked by serious factors of crisis. From this last point of view, the structure of the town was fragile, lacking the necessary productive diversification, because it was still too conditioned by the past, by the copper mining ‘monoculture’ which, if it had allowed expansion in the 1960s and 1970s, had also determined the crisis, when international metal prices fell precipitously. The company also appeared marked by a profound malaise, largely fueled by the worsening of the standard of living,

Continuous reshuffles and deep divisions, even over relevant choices such as those relating to the privatization of the state copper mining company, characterized the life of the government in the second half of the 1990s, while a project to amend the Constitution was proposed and implemented by Chiluba. aimed at limiting the freedom of the press and political participation.

In particular, some measures, prohibiting the possibility of running for president for those who did not have both parents native to Zambia, aimed at preventing the participation in the elections of former president Kaunda, the son of immigrants from Malawi. The accusations of authoritarianism leveled against the president by the opposition were also substantially resumed at the international level in the summer of 1996, when the United States and Norway, soon imitated by other European nations, reduced their aid to Zambia. The constitutional changes were approved by a large majority by the National Assembly in May 1996, and in November of the same year presidential and legislative elections were held according to the new rules, despite the opposition’s request that they be postponed or held on the basis of the rules established in 1991. The consultations, boycotted dall’UNIP and characterized by a low turnout, confirmed Chiluba for the presidency with 72, 5 % of the votes, while his party won 131 of the 150 National Assembly seats. The opposition parties presented themselves to the electoral test divided and very fragmented, obtaining only 9seats; the rest went in fact to independent candidates. The elections marked a further tightening of relations between the government and the opposition which organized a campaign of civil disobedience. During a demonstration in August 1997, Kaunda was wounded by the police forces who intervened to disperse the demonstrators and in December 1997, after the proclamation of a state of emergency, he was placed under house arrest for suspected complicity in an alleged attempted coup. It took place in October 1997. He was exonerated in June 1998.

The political climate continued to be marked by polemics and tensions that became ever stronger, fueled by the government’s repressive policy and by the succession of serious episodes, such as the attacks that shook Lusaka in February 1999. In April of the same year the main opposition groups, overcoming their traditional divisions, gave birth to a new unitary political formation.