According to Countryaah.com, with capital city of Sanaa, Yemen is a country located in Western Asia with total population of 29,825,975. 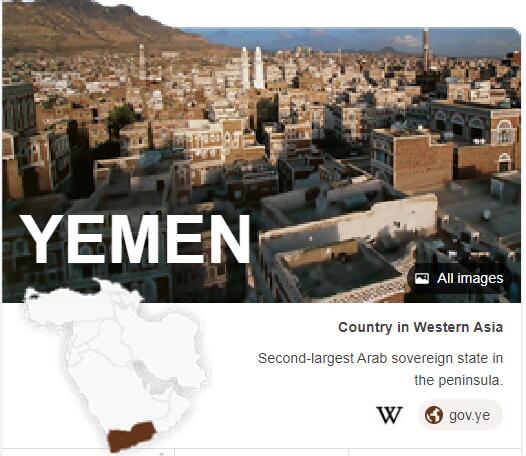 Yemen is a republic, and the constitution prescribes elections to a legislative assembly (parliament) and president.

As a result of the war in Yemen, from 2015, the established political system has been put out of order, and the country has by no means ceased to act as a state formation. There are rival centers of power in Sanaa and Aden. The internationally recognized government has been expelled from the capital Sanaa, and the president has gone into exile in Saudi Arabia. The Houti rebel movement controls much of the country, including the capital. Various militia groups are fighting for control of southern Yemen, including Aden; some of them for detachment. See ABBREVIATIONFINDER for how YE can stand for Yemen.

The two former states of North Yemen and South Yemen were merged into one state formation in 1990. They had very different political foundations. Both were republics; South Yemen with a Marxist regime. Under the new constitution of 1991, Yemen is a unified state, Arab and Islamic republic. The head of state, the president, is elected to the general election for seven years and can be re-elected once. The executive power lies with the president, who appoints the prime minister, who heads the government. The president is also supreme commander of the country’s defense.

The legislative power has been added to the House of Representatives (Majlis al-Nuwaab) with 301 members, who are elected in the general elections for a term of six years. In addition, there is a 59-member consultative council (shura) established in 1997. The members are appointed by the president. The two bodies are sometimes referred to as two chambers in parliament, with the consultative council as a form of upper house.

Yemen has a multi-party system, but politics has been dominated by two parties; The General People’s Congress and the Islah Party.

Administratively, Yemen is divided into 20 provinces (governorates; muhafazat), as well as the metropolitan area of ​​Sanaa.

The judicial system is based on Islamic law. In the former northern Yemen there was also a tribal justice system that has been retained to some extent. Similarly, the justice system has also been influenced by South Yemen, which is based on English common law, modified with elements of Marxist law.

The judicial system consists of three levels, with first instance at district level and appellate courts at provincial level, as well as the Supreme Court.

As a result of the 2015 Yemen War, which followed a civil war following the uprising in 2011–2012, national defense has partially disintegrated. The government was expelled from the capital Sanaa by the Houti rebels in 2015, and re-established itself in Aden.

Remaining parts of the government forces have established themselves in former South Yemen, where a number of local militia groups are also active.

Yemen has a post-selection military service, with 24 months of initial service. The total force figures for the government forces are 40,000 active personnel (2018, IISS).

In 2019, the United Arab Emirates withdrew its troops from Yemen, and operational support for militia groups in the south was taken over by Saudi Arabia.