According to Countryaah.com, with capital city of Damascus, Syria is a country located in Western Asia with total population of 17,500,669. 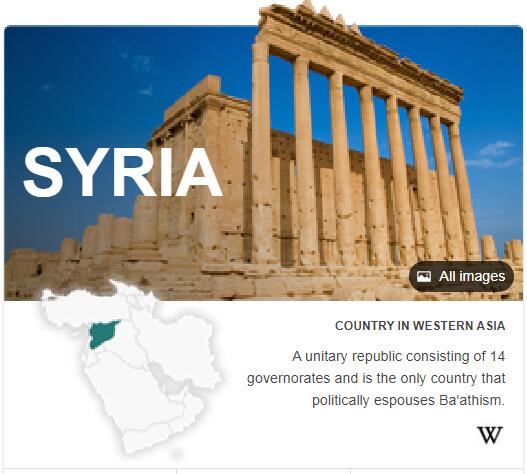 Under the al-Asad family’s rule, Syria has been developing in an increasingly authoritarian direction since the 1970s. In the context of the Arab Spring 2011, a revolt broke out, which developed into a full-scale civil war. This has broken the country, strengthened the contradictions between different peoples and led to a massive stream of refugees both within and out of the country. See also Syrian Civil War.

According to the 1973 constitution, Syria is a socialist republic with the executive power of the president, who must be Muslim and elected every seven years in general elections. See ABBREVIATIONFINDER for how SY can stand for Syria. The legislative power is held by a single-chamber parliament (people’s council) with 250 seats, which are elected in general elections every four years. In practice, the president, with his extensive powers, has the decisive power.

Political life is channeled through the National Progressive Front, an alliance between the Bath Party and several small parties. The alliance is controlled by the Bath Party, which in practice therefore has a monopoly on political activity. The party builds its program on the principles of Arab freedom, Arab unity and socialism. In the current regime, the party has in practice been taken over by the military and pan-Arabism replaced by narrow Syrian nationalism.

In the 2007 election, Bashar al-Asad had no counter-candidate and was elected with 97.6 percent of the votes cast. The official turnout was only 56 percent, but the opposition estimated the actual figure to be 10 percent. The 2014 elections, during the ongoing civil war, could only be conducted in regime-controlled parts of Syria. According to the official election result, al-Asad was re-elected with 88.7 percent of the vote.

After Bashar al-Asad’s power in 2000, the opposition, during the so-called Damascus Spring, demanded democratic reforms in the country. However, most of these reform activists were jailed in August 2001. In October 2005, an alliance of Syrian parties and other opposition parties jointly demanded the abolition of the 1963 Exception Act, the release of political prisoners and the country’s Kurdish issue. Vice President Abdul Halim Khaddam (1932-2020) resigned in 2004 and went into exile in France, from where he continued to work for a Syrian revolt against the current regime.

In March 2011, widespread popular demonstrations against Bashar al-Asad and his regime began. Initially, some attempts were made to meet the protesters, among other things, the government was set aside and the long-standing state of emergency was lifted. As the demonstrations continued, heavily armed military forces were deployed and the conflict escalated.

The regime-critical resistance was organized militarily as the Free Syrian Army. Even larger sections of the international community, including the Arab League countries, turned to President al-Asad and demanded his departure. However, the Russian Federation and China blocked all initiatives aimed at getting the UN to intervene in the conflict.

At the end of 2011, civil war raged in parts of Syria with armed insurgency, especially in some rural areas. During 2012-13, the fighting intensified and spread to large parts of Syria, including large cities such as Hums, parts of Damascus and Aleppo. In early 2016, more than half of Syria’s population was in need of humanitarian aid as a result of the civil war. More than 5 million people had fled the country and about 6.5 million Syrians were fleeing the country.

In the fall of 2015, the Russian Federation, which supported the Syrian regime, launched aerial bombings of strategically important targets in Syria. Iran, too, increased its support for al-Asad by organizing and funding Shi’ites that strengthened Syrian security forces on the ground. Thus, the regime was able to gradually recover lost terrain. The Islamic State (IS) terror organization, which has established a so-called caliphate in parts of Syria and Iraq, was also defeated by a US-led coalition in cooperation with Kurdish militia forces. With the exception of a few areas in the northwestern and southeastern parts, the country was again controlled mainly by al-Asad in early 2020.

Prior to the start of the Syrian civil war in 2011, the Bath regime’s policy was considered to have given Syria a degree of stability. However, the regime’s repression of all opposition has long been the subject of international criticism. Compare Human Rights.

The Soviet Union was formerly Syria’s close ally and arms supplier. Following the collapse of the Soviet Union, a certain approach to the United States occurred in the early 1990s, but this ceased soon after Bashar al-Asad’s entry into power. The country’s friendly relations with Iran have also contributed to deteriorating relations with the West. Since the peace talks with Israel were canceled in 2000, and following the US-led alliance’s occupation of Iraq in 2003, Syria has used increasingly harsh fights against the United States and Israel.

The legal order in Syria is mainly codified according to French and Egyptian patterns, with, among other things, Civil Law, Commercial Law, Criminal Law, Civil Procedure Law and Criminal Procedure Law. The judicial organization is also French influenced, but within family law, religious courts appear (compare Religion above). The death penalty is punished for some serious crimes.

The al-Asad family’s authoritarian rule (see History) was challenged in the spring of 2011 by groups of political opponents who, inspired by the Arab spring, began a revolt with demands for regime change.

The protests met with heavy force from the regime, which exacerbated the tensions of a real civil war. The already substandard human rights situation in Syria, where the security service was in practice outside the justice system and where corruption was widespread, worsened dramatically.

The civil war led to a humanitarian disaster, which displaced over half of the country’s population. Most, over 6 million, stayed as internal refugees within the country while a further over 5 million left the country. The number of people killed in the war is estimated to be half a million.

The parties to the conflict, al-Asad’s government forces and the foreign-supported Islamist opposition groups within and out of the Free Syrian Army, systematically commit serious crimes and abuses on the civilian population and each other. Human Rights Watch reports show extensive physical and mental torture, assault, extrajudicial executions and kidnappings. In addition, there are the major abuses committed by the Islamic State (IS) terrorist organization in 2014-19. Russian aerial bombings have also contributed to widespread suffering among the civilian population.

According to OPCW, the deadly nerve gas sarin was used as part of the warfare on at least four occasions, but who bore the burden of blame on those occasions has not been determined. The government gas, civilian population and rebel forces were hit by the chemical gas. The pressure from the outside world after the nerve gas attacks led Syria to join the Convention on the Prohibition of Chemical Weapons in 2013. Further nuclear weapons attacks have also been carried out thereafter.

In the wake of the war, the situation for human rights has deteriorated further. While the Constitution guarantees the right to speak freely in speech and writing, bloggers, political activists and human rights defenders are subject to arbitrary detention and torture. Direct censorship as well as self-censorship occur. In  Reporters Without Borders Press Freedom Index, Syria in 2019 placed 174 out of 180 countries.

Women are discriminated against in Syrian legislation, especially family law, which rests on Sharia. The prevalence of child and forced marriage is high. Although gender equality is prescribed in the Constitution, patriarchal structures hamper women’s access to the labor market and political and public life. Rape within marriage is exempt from the Criminal Code section on rape.

Since the beginning of the civil war, the situation for children has deteriorated. Children are subjected to abuses such as torture, abuse and sexual violence from various parties to the conflict.

LGBTQ people are vulnerable in Syrian society. Homosexuality is not mentioned in the legislation but there are passages that prohibit “unnatural sexual intercourse” where the sentence is up to three years in prison.

Syrian law states that 2 percent of employees in companies with more than 50 employees should be persons with disabilities. However, social structures and stigma mean that these groups are often hidden from the public.