According to Countryaah.com, with capital city of Paramaribo, Suriname is a country located in South America with total population of 586,643. 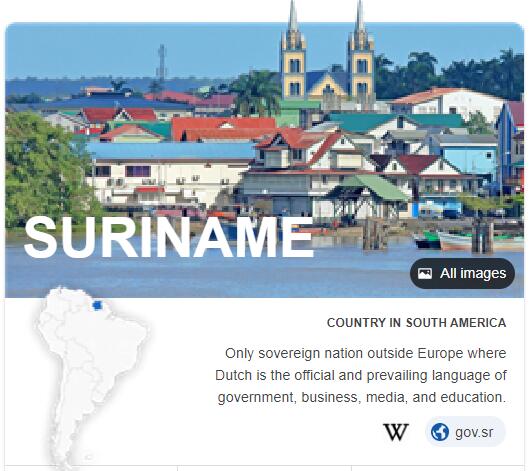 Administratively, the country of Suriname is divided into nine districts as well as the metropolitan area. See ABBREVIATIONFINDER for how SR can stand for Suriname.

The judiciary includes a judicial court and three cantonal courts. The legislation is based on Dutch and French examples.

The total force figures for Suriname’s armed forces are 1840 active personnel (2018, IISS). All military forces fall under the army, and the country does not have its own air force or navy.

At the turn of the century the Suriname was shaken by financial scandals that involved some ministers and by social protests against the government’s economic policy. The legislative elections of May 2000 thus resulted in a heavy defeat of the main party of the ruling majority, the Nationale Democratische Partij (NDP, National Democratic Party), which participated in the consultations within the Millenium Combinatie (MC, Millennium Alliance) coalition.. This obtained only 10 out of 51 seats, compared to the 33 won by the Nieuw Front (NF, New Front) electoral alliance, formed by the Nationale Partij Suriname (NPS, Suriname National Party), Pertajah Luhur (PL, Full Trust Party), Surinaamse Partij van de Arbeid (SA, Suriname Labor Party), and Vooruitstrevende Hervormingspartij (VHP, Progressive Reform Party). In August 2000 R. Venetiaan, leader of the NF, former head of state from 1991 to 1996, was re-elected president of the Republic by the National Assembly. Meanwhile, the position of D. Bouterse, the former dictator who came to power in 1980 and later became leader of the NDP, appeared to be increasingly compromised: already sentenced in absentia in 1999 by a Dutch court to 16years (later reduced to 11), for his involvement in drug trafficking between the Suriname and the Netherlands, Bouterse was later accused by a military court of the Suriname (Dec. 2004) for the murders committed in December 1982 in the course of a violent action of force against the opposition. In March 2005 the hypothesis of his candidacy for the presidency of the Republic was opposed by the United States, but this possibility was nevertheless averted by the success in the legislative elections (May) of the NF, which won 23 seats; the NDP, although growing especially among the younger electorate, stopped at 15. In August Venetiaan was reconfirmed as president, beating the NDP candidate, R. Parmessar.