According to Countryaah.com, with capital city of Mogadishu, Somalia is a country located in Eastern Africa with total population of 15,893,233. 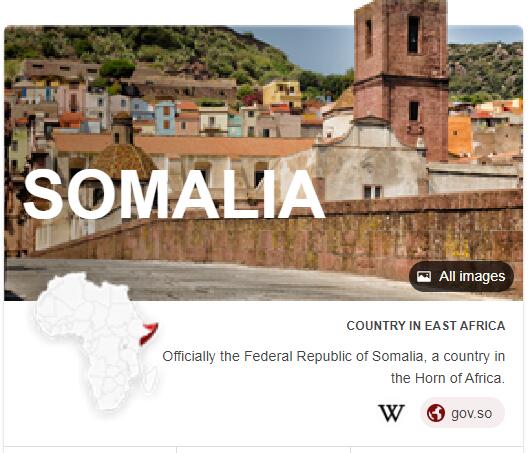 Somalia has been a federal state since 2012, with a central government and several autonomous states.

During the civil war of the 1990s, after the regime of President Siad Barre was overthrown in 1991, and well into the 2000s, Somlia was a country without a functioning state. Power struggles led rival groups to control different parts of the country and respective parts of the capital Mogadishu. The militia groups were dominated by clans, which thus consolidated their influence in the respective regions.

The area which, before independence in 1960, constituted the British protectorate, Somaliland, broke out of the Somalia state formation in 1991, declaring its independence, which has not been internationally recognized. In 1998, the province of Puntland declared independence, but without seeking recognition as an independent state, with the aim of contributing to the development of a united, federative Somalia.

Until 1991, Somalia was a unified state, authoritatively governed republic. Subsequently, Somalia long lacked an effective central authority. See ABBREVIATIONFINDER for how SO can stand for Somalia.

Following a conference in Djibouti in 2000, a Transitional National Government (TNG) was established. Following a subsequent peace process, the country was granted a temporary constitution in 2004, and a temporary national assembly of 275 members was appointed. It consisted of 61 members from each of the four largest clans as well as 31 other members. In 2004, it elected a transitional president for five years. A Transitional Federal Government (TFG) was also established in 2004. This re-established several national institutions, including a national defense.

TFG was Somalia’s internationally recognized government until 2012, when a new constitution was passed, and a new national assembly and government took over the governance of the country. The new National Assembly was inaugurated on August 12, 2012. With the new constitution, Somalia is a federal state, with several states having internal autonomy. The establishment of the states, with their governance structures, has been gradual. As of 2018, there were six states: Galmudug, Hishabelle, Jubaland, Puntland, Somaliland and southwest Somalia.

The Mogadishu Federal National Assembly consists of two chambers; a Senate (Upper House) with 54 members and a People’s Assembly (Lower House) with 275 representatives. The Constitution provides that 30 percent of the members of parliament should be women.

Somalia’s head of state is the president, who is elected by the National Assembly. The president appoints the prime minister, who must be approved in parliament.

Somalia was previously divided into 18 provinces. With the introduction of a federal structure from 2012, the country is divided into states, which in turn are divided into administrative regions and then districts.

The Constitution provides that the judiciary is independent of the legislative and executive power (parliament and government). The judicial structure consists of a constitutional law (Supreme Court), federal (state) courts and state-level courts.

The Somali judiciary is based on Islamic law.

After the political upheaval in Somalia in 1991, and the state’s real disintegration, the national armed forces disbanded. Various clans and their militia forces then fought for power. These include from the mid-2000s the Islamist group al-Shabaab, affiliated with al-Qaeda. The outbreak states Somaliland and Puntland established their own military forces.

A peacekeeping force deployed by the African Union, the African Union Mission in Somalia (AMISOM), has since 2007 helped to fight al-Shabaab and facilitate the reconstruction of a national defense. With a new constitution from 2012, Somalia is a federal state with a central government working to establish new state functions, including a national defense, the Somali National Armed Forces (SNAF). Several countries have contributed to training Somali forces, including the United Arab Emirates (FAE), Djibouti, Egypt, Qatar, Sudan and Turkey. UK and US has also contributed; so has the EU, with a training program that first started in Uganda and continued in Somalia: European Union Training Mission Somalia. The FAE has promoted its regional ambitions by building its own base in Berbera, Somaliland, contrary to the wishes of the Somali government.