According to Countryaah.com, with capital city of Bratislava, Slovakia is a country located in Eastern Europe with total population of 5,459,653. 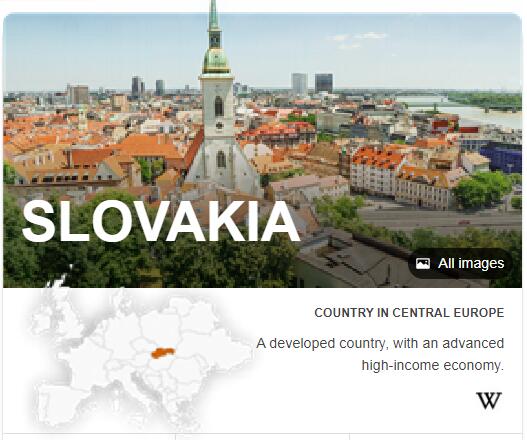 The Slovak National Council adopted a new constitution on September 1, 1992, four months before the partition of Czechoslovakia. According to the Constitution, which was amended on several points in 2001 prior to EU membership, Slovakia is a sovereign, democratic rule of law.

The Parliament, the National Council, has 150 members and holds the legislative power. Members are elected in general elections according to a proportional electoral method with party lists for a period of four years. Parliament shall approve the incoming prime minister, who is essentially the executive, as well as the entire government. The National Council appoints members to the Constitutional Court.

The President, who is the country’s head of state and commander-in-chief, has since 1999 been elected directly by the people for a period of five years and can hold office for a maximum of two periods. After consulting the political parties, the President appoints the Prime Minister and also the other members of the government. The President may also veto certain laws himself or on behalf of the Government and return them to Parliament, which may, however, repeal the veto by a simple majority.

The governments in Slovakia have for several years been made up of fairly diverse coalitions. The majority of the parties can be simplified into a middle-right group that is more reform-friendly and Western-oriented, and a left-wing group with a more nationalist and EU-skeptical orientation. See ABBREVIATIONFINDER for how SK can stand for Slovakia.

The largest party in Slovakia is the left-wing party Smer – sociálna democracia (‘The direction – social democracy’), led by Robert Fico (born 1964). Called both populist and nationalist, the Smer SD has its roots in the reformed Communist Party. At the party formation in 1999, the party was only called Smer but was renamed Smer-SD when it merged with a couple of left parties before the 2006 election. Between 2006 and 2010, Fico formed a coalition with the disputed Vladimír Mečiars (born 1942) party Ľudová strana – Hnutie za demokrické Slovensko (‘People’s Party – The Movement for a Democratic Slovakia’, ĽS-HZDS) and the right-wing extremist nationalist Slovenská národná (‘Slovak National Party’, SNS). The two parties fell out of parliament in 2010 and 2012, respectively, but the SNS returned after the 2016 election and then came back into the government.

The largest of the center-right parties that ruled in 1998-2006 and 2010-12 are the Slovenská democracyická a kresťanská únia (‘Slovak Democratic and Christian Union’, SDKÚ-DS, where DS stands for Demokratická strana, ‘Democratic Party’, which joined in 2006). Another party with a Christian democratic orientation was included in the government coalitions, the Kresťanskodemokratické hnutie (the “Christian Democratic Movement”, KDH). The government coalition formed after the 2010 elections also included two new parliamentary parties: Most-Híd and Sloboda a solidarita (‘Freedom and democracy’, SaS). The Prime Minister was for the first time a woman, Iveta Radičová (born 1965) (SDKÚ-DS).

The bourgeois government fell after disagreement over Slovakia’s contribution to the euro area crisis fund. The liberal but Euro-skeptical SaS opposed the SDKÚ-DS and Prime Minister Radičová, who lost a vote on the issue in October 2011. New elections were held in March 2012, in which Smer-SD received 44 percent of the vote and 83 seats, thus forming a separate majority government. Robert Fico again became prime minister. SDKÚ-DS and SaS together lost 28 out of 50 seats in Parliament.

A major contributor to the 2012 election result was the corruption legacy that was named “the gorilla scandal” which leaked to the public and media through the Internet at the end of 2011. The published documents were based on interceptions (with the code name Gorila) performed by the security police and indicated that bribery occurred in large scale in connection with privatizations of state-owned companies 2005–06. The gorilla scandal resulted in major popular protests against corruption.

Prime Minister Robert Fico was in office in the 2014 presidential election. Sitting President Ivan Gašparovič (born 1941) had been re-elected in 2009 and could not run for another term. However, Fico had to be defeated by independent candidate Andrej Kiska (born 1963), who in the second round of voting received 59 percent of the vote.

The 2016 parliamentary election marked a sharp decline for Smer-SD, which admittedly became the largest party but lost the strong majority it had previously had. The party received only 28 percent of the vote, which meant it lost 34 seats and landed on 49 seats out of 150 possible.

Fico was able to form government again, but now together with the right-wing extremist SNS, the center-right party Network and the Hungarian embossed Bro (Most-Hid). A total of eight parties entered Parliament. The electoral movement was characterized by a harsh rhetoric against refugees and migration, which promoted parties that criticized immigration and said they were for nationalism. Among them were the Nationalist Slovak National Party and the newcomers to the extreme right Party Our Slovakia. The latter party is led by ultranationalist Marian Kotleba (born 1977). The party’s electoral success is partly explained by the fear played in connection with the so-called refugee crisis in 2015, and thus attracted first-time voters and young people in poor parts of the country.

A serious political crisis arose in early 2018 following the murder of a journalist investigating links between the government and international crime. The president’s demand for new elections was rejected by Prime Minister Fico, who resigned after more than 40,000 people demonstrated in Bratislava. He was succeeded by Deputy Prime Minister Peter Pellegrini (born 1975).

Although the head of state has a mainly ceremonial role, the presidential election in March 2019 was seen as a setback for the country’s conservative forces. Neither Kotleba nor the conservative former Minister of Justice Štefan Harabin (born 1957) went on to the second round. Instead, Commissioner Maroš Šefčovič, who was running as an independent candidate but supported by Smer SD, met Zuzana Čaputová, a lawyer who made himself known for his fight against corruption. Čaputová, representing the small Liberal Party Progressive Slovakia, received 41 percent of the vote in the first round. After receiving 58 percent of the vote in the second round, it was clear that the country would get its first female president. Čaputová’s liberal views have been heavily criticized by conservative forces, including the Catholic Church. With a turnout of only 42 percent, it was difficult to judge whether her electoral victory meant a true trend break in Slovak politics. See also History.

Following the division of Czechoslovakia on January 1, 1993, Slovakia continues to apply and further develop the existing legal system. This is codified and consists mainly of civil law, civil procedure law, criminal law, criminal law and commercial law. The judiciary consists mainly of district courts, regional courts, the Supreme Court and the Constitutional Court.

Since 2004, legal developments have been greatly influenced by the country’s membership of the EU. The death penalty was abolished in 1990 in the then Czechoslovak Republic and is not included in the penal code in the Slovak Republic.