According to Countryaah.com, with capital city of Belgrade, Serbia is a country located in Southern Europe with total population of 8,737,382. 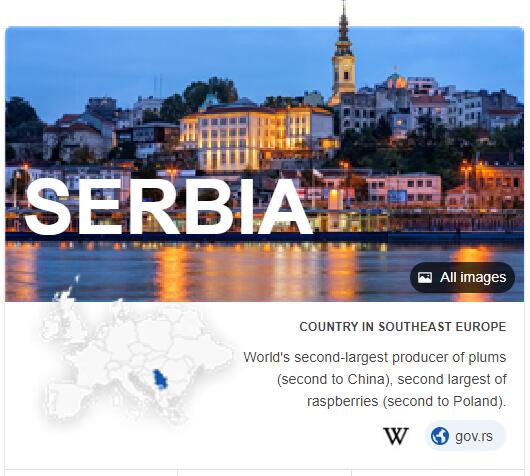 The Republic of Serbia is a state located on the Balkan Peninsula.

Serbia is a republic with a parliamentary system of government. The country’s head of state is a president-elect who is elected by secret ballot through a direct election with two electoral votes. The president of Serbia is elected for a five-year term, and can legally sit for two terms.

Legislative power resides with the National Assembly (Narodna skupština), which consists of 250 members. These are elected by secret ballot through a proportional representation system. Parliamentary elections are held every four years.

The executive power in Serbia is exercised by the government, led by the prime minister. See ABBREVIATIONFINDER for how SCG can stand for Serbia. The Government of Serbia consists of Prime Minister, Deputy Prime Ministers and Ministers. The prime minister is appointed by the country’s president in consultation with the national assembly. Candidates for the post of prime minister must present their program to the National Assembly and submit a list of potential ministers to a new government. The Government shall be considered elected if the majority of the total number of representatives in the National Assembly approves this composition.

Serbia has a multi-party system, with many political parties competing in one nationwide constituency. The parties have little opportunity to exercise power alone, which often results in the formation of coalition governments. The elections are held at parliamentary, provincial and local levels every four years, while the presidential elections are held every five years. The threshold for entering parliament is 5%, but there is no minimum threshold for political parties representing coalitions of ethnic minorities.

Legal authority is exercised by the Serbian judiciary. The judicial system consists of courts that interpret and apply the law, and which are independent of both executive and legislative power. The system includes a constitutional court, the Supreme Court as well as regional and local courts. See a2zcamerablog.com for Serbia tour plan.

The development of Serbia’s political system is strongly influenced by the events that followed the Cold War in the late 1980s, including the formal dissolution of Yugoslavia in 1992 and the subsequent Balkan wars in Croatia, Bosnia-Herzegovina and Kosovo. Since the dissolution of Yugoslavia in 1992, Serbia has been part of a state formation that has changed its name and profile several times. From 1992 to 2003, Serbia was part of the Federal Republic of Yugoslavia (SRJ) together with Montenegro. The federation changed its name to Serbia and Montenegro in 2003. A referendum in Montenegro in May 2006 provided a majority for independence, and on June 3, 2006, Montenegro declared its independence. The country’s independence quickly gained international recognition, and from June 2006, Serbia and Montenegro were two separate, independent states. Therefore, since 2006, Serbia has served as an independent state republic. On February 17, 2008, Kosovo disbanded and declared its independence from Serbia.

Serbia was a part of Yugoslavia since its establishment in 1918. Serbia became a sub-republic of the Socialist Federative Republic of Yugoslavia (SFRJ), formally established in 1945 and ruled by Josip Broz Tito and the Yugoslav Communist Party. According to the Yugoslav Constitution of 1946, the Republic of Serbia had an autonomous province, Vojvodina and an autonomous district, Kosovo. In 1968, Kosovo gained the status of autonomous province on par with Vojvodina. As a result of the 1974 constitution, the two provinces were given the right to veto, and in practice were equated with the other sub-republics in the decision-making process in Yugoslavia. The Serbian Communist Party was dissatisfied that the two provinces had increased autonomy, and after Tito’s death in 1980, the Serbian Communist leaders worked to limit independence to Kosovo and Vojvodina, and to bring them under more centralized control from Belgrade. Under Slobodan Milošević, Kosovo lost its autonomous status and was subject to direct government from Belgrade. Vojvodina had a certain autonomy as a Serbian province with its own elected provincial assembly and provincial government, but Vojvodina’s autonomous status was also weakened as a result of Milošević’s rule.

When the Socialist Federative Republic of Yugoslavia (SFRJ) disbanded in 1992, the former sub-republics of Serbia and Montenegro decided to join a new federation, the Federal Republic of Yugoslavia (SRJ). A new constitution came into force the same year. The SRJ wanted to be seen as a successor state of the Socialist Federal Republic of Yugoslavia after Slovenia, Croatia, Bosnia-Herzegovina and Macedonia declared independence. But internationally, it was difficult for SR Yugoslavia to be recognized. The other Yugoslav successor states also opposed that the SRJ should be regarded as the SFRJ’s rightful heir with the acquisition of resources and continuation of membership in international institutions as this would mean.

In May 1992, the UN Security Council adopted extensive sanctions against Yugoslavia due to the federation’s role in the war in Bosnia. These sanctions stood by for almost four years, until the spring of 1996. Yugoslavia was deprived of membership in the UN in September 1992, and its membership in other international organizations was put on ice. After Slobodan Milošević was removed from power in Serbia in 2000, the new Serbian authorities recognized the Badinter Commission’s statement on shared successor rights for all the former Yugoslav republics, and reapplied for membership in the UN. From November 2, 2000, Serbia has been a member of the UN. After Montenegro left the Union in 2006, Serbia continued in its role as the Union’s formal successor, while Montenegro applied for its own membership in the UN and other international organizations.

According to the Constitution of 1992, the SRJ was, albeit in practice, not quite real, the Democratic Federal Republic. Slightly derogatory, the new country was called “Rest Yugoslavia”. Under Slobodan Milošević’s leadership, Serbia dominated the SRJ completely, and the federal agencies were therefore of minor importance. The federal president, who had little power, was appointed by the Federal Assembly. The two federal republics were formally democratic, with legislative authority added to elected Republican assemblies (250 members in Serbia, 85 in Montenegro). Executive power lay with the elected president of the republics. It was the presidents of the republics that characterized politics, including at the federal level, especially the Serbian president Slobodan Milošević.

Kosovo was formerly an autonomous province of Serbia but lost its autonomous status under Milošević. Implementation of Security Council Resolution 1244 in the wake of NATO’s intervention in 1999 placed Kosovo under the interim administration of the international community, while further status remained unclear. Serbia lost the opportunity for direct influence in Kosovo after 1999, but has continued to insist on its sovereignty in Kosovo. Serbia has referred to the reference in Resolution 1244 on “Sovereignty and Territorial Integrity of the Federal Republic of Yugoslavia” as a guarantee of its continued demand for Kosovo, even after the Republic of Yugoslavia ceased to exist.

In 2003, the state federation was given a new constitution and at the same time changed its name to Serbia and Montenegro. Under the new constitution, the ties between the two republics became looser, and it was opened, among other things, for the republics to step out of the state federation after three years. The federal president had a government of only five members working on foreign and defense policy, the economy, human rights and minority issues. A single-chamber parliament with 126 directly elected members was created (91 Serbs, 35 Montenegrin), but Montenegro would not vote in a joint election to the National Assembly in 2005 and instead proposed the dissolution of the state federation. Both republics continued with their own parliaments, governments and presidents.

See also the history of Serbia and Montenegro.

Serbia was without president 2002–04; all the elections were rejected because of low turnout, which is because the various candidates called on their supporters to boycott if they were not sure of winning.