According to Countryaah.com, with capital city of Riyadh, Saudi Arabia is a country located in Western Asia with total population of 34,813,882. 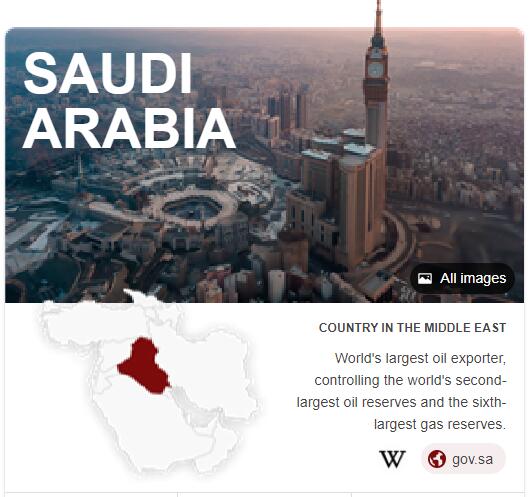 Saudi Arabia is a non-constitutional absolute monarchy. The King, who since 1986 also bears the title “protector of the two sacred mosques”, holds the position of prime minister and usually commander-in-chief. The King leads the country together with the Crown Prince, who is the Deputy Head of Government and Deputy Commander-in-Chief.

The monarchy in its present form was founded in 1932 by Ibn Saud. The Qur’an and Islamic law, Sharia, form the basis for the regime, but through a royal decree in 1992, the so-called Basic Laws, a basic constitutional system of rules for state government, were introduced, in which new administrative forms were adopted as well as rules for the exercise of authority and the introduction of consultative councils. local, regional and national level. See ABBREVIATIONFINDER for how SA can stand for Saudi Arabia.

The executive and legislative power rests with the Council of Ministers, whose members are appointed by the King, as a rule for four years. The king leads the Council of Ministers and several of the ministers belong to the royal family. A national consultative council (Majlis ash-shura) was created in 1993, originally with 60 seats. The members are appointed by the king for four years. Both the number of members of Majlis ash-shura and its mandate have expanded over time. In 2005, the number was 150, and the Council now has the opportunity to submit its own proposals, including budget proposals, as well as to provide views on how different ministries manage their areas of activity. The Council’s meetings are broadcast on TV and submitted proposals are presented in the media, which gives citizens the opportunity to follow the Council’s work.

Although the king formally appoints all members of Majlis ash-shura, proposals for candidates from private and public institutions are obtained. Until 2013, there were no female members in the council, but the most important female networks received all suggestions and acted as informal referral bodies. A royal decree in 2013 stipulated that at least 20 percent of the council members would be women, and 30 women would be sworn in. In light of the women’s actual influence in the country, partly based on their financial assets, which today correspond to half of the private wealth in the country, it is logical that they also have a political influence. In the chambers of commerce, women have gained a rapidly growing influence as well as within the banking system. The same applies to developments at regional and local level.

Saudi Arabia is divided into 13 provinces, which in turn are divided into 103 regional boards that provide various services to citizens; In addition, there are district councils as well as councils at village and tribal level. The 13 provinces are governed by members of the royal family or relatives. However, it should be noted that members of all major tribes are inducted into the royal family, which is why a certain power dissemination exists.

In 2005, municipal elections were held. Half of the seats would be selected as before, while the remainder would be selected. According to the Election Act of 2004, Saudi women and men should be able to vote and stand, but in that election, women were not allowed to exercise these rights. Neither political parties, political meetings nor in-house demonstrations are allowed. The Saudi regime, on the other hand, has organized many and large conferences in which the country’s reform policy is discussed and proposals from citizens are presented. What is being sought is a consensus to modernize and open up the rigid society formed by Wahhabism and traditional Bedouin culture. Getting a peaceful and smooth transition is a piece of art in light of the existing al-Qaeda-related networks and generally conservative sympathizers in the country.

Saudi Arabia has a leading role in the Arab world and seeks to actively participate in resolving the conflicts that exist throughout the Middle East. The country assisted Iraq with large arms purchases during the Iraq-Iran war of 1980-88 and together with Kuwait provided the bulk of the financing of Kuwait’s liberation from Iraq’s occupation of the country from 1990-91. Since 1981, Saudi Arabia has played a leading role within the Gulf Cooperation Council (GCC), which also includes Bahrain, the United Arab Emirates, Kuwait, Oman and Qatar. These six states have established a free trade area, which since 2003 has gradually developed into a customs union. The purpose of the GCC is also to have a coordinated foreign and defense policy as well as oil and energy policy, but as in the EU, there are contradictions between the states.

On a global level, Saudi Arabia has always been seen as a close ally to the United States, but the September 11 attacks in 2001 in the United States came to complicate relations. Saudi Arabia opposed the US-led occupation of Iraq in 2003 and remains critical of US support for Israel. The threat from groups associated with al-Qaeda is occasionally mentioned. In 2009 and 2010, at least 200 militant al-Qaeda supporters were arrested. However, this does not interfere with the arms dealings with the United States, which in 2010 confirmed a new agreement on the sale of military equipment for 60 billion US dollars to Saudi Arabia, which was the largest single business conducted by the US arms industry to date.

In recent years, Saudi Arabia has widened and deepened its cooperation with the Russian Federation, India and China.

The Arab Spring has affected Saudi Arabia in several ways. In early 2011, King Abdullah made the decision to increase welfare policy initiatives in the country. Saudi Arabia sent troops to Bahrain in 2011 to help the regime there to regain control. Within the GCC there is mutual defense and security policy cooperation, which Bahrain could rely on. However, the Saudi intervention in the Bahrain conflict sparked protests from mainly Saudi Shi’ites in the eastern province. Protests in the eastern province erupted again in 2012 demanding the release of a Shiite religious leader. In the conflict between the Syrian Assad regime and the Sunni Muslim Syrian rebel forces, Saudi Arabia’s support for the rebel forces has been significant.

The basis of the legal system in Saudi Arabia is Islamic law, more specifically, the Han Balitic School of Law. However, the country also has extensive modern legislation, not least in the area of commercial law. The judiciary consists mainly of Islamic sharia courts (compare Islamic law), supplemented by a number of specialized courts for commercial purposes. The death penalty is punished for some serious crimes.

In recent years, the Saudi state has shown no relief in its authoritarian stance and intolerance of dissent. Peaceful demonstrations are often met with violence and arbitrary detention as well as inadequate trials are the norm. The authorities also continue to suppress the protection of women and guest workers.

According to Human Rights Watch, the number of lawsuits against human rights defenders is steadily increasing, requiring reform of the justice system as a result of the country’s lack of respect for human rights.

Guest-working migrants make up half the workforce in administration and service occupations in the country. Many are subjected to abuse and exploitation. In some cases, their relationship can be described as slave-like. Their rights are heavily circumscribed and employers often abuse their position towards this group. Many immigrant domestic workers face the death penalty after barely accessing legal advice or translators during court hearings.

The authorities have a strong influence over the newspaper editorials and the state approves the new editor-in-chief and can dismiss them. Blogs, internet cafes and social media are constantly monitored. According to Reporters Without Borders, over 400,000 web pages are blocked and in the 2015 Press Freedom Index, Saudi Arabia is ranked 164 out of 180 countries.

Neither political parties, trade unions nor opposition groups are allowed.

Although the country has ratified the Convention on the Elimination of All Forms of Discrimination Against Women, it is not complied with when it contrasts with the interpretation of Sharia in Saudi Arabia. Girls and women are prohibited from traveling, working, going to hospital or undergoing certain medical procedures without the permission of their male guardians, and in court a woman’s testimony weighs half as heavy as a man’s. The Morality Police monitor women’s strict dress code and women were not allowed to drive a car until 2018.

Domestic violence is common and not prohibited by law. However, in December 2015, women were allowed for the first time to participate both as candidates and voters in local elections. More than 2,100 representatives in local councils would be elected, and the election resulted in about 20 female candidates being voted in.

Interns in prisons, including children, are subject to systematic violations and are often denied the right to a fair trial. Arbitrary arrests, torture and mistreatment are common, and Saudi judges routinely convict prosecution. Cross amputation, that is, amputation of the right hand and left foot, also occurs as punishment in robbery and theft. Other offenses that may result in corporal punishment are theft, drug possession, homosexual acts and rape.

The death penalty can be imposed in accordance with the country’s sharia laws for, among other things, murder, rape, drug-related crimes and witchcraft. Children convicted of crimes can receive a death penalty when they turn eighteen. There have also been reports of children found illegally in the country who have been deported to conflicting countries such as Yemen and Somalia.