According to Countryaah.com, with capital city of Muscat, Oman is a country located in Western Asia with total population of 5,106,637. 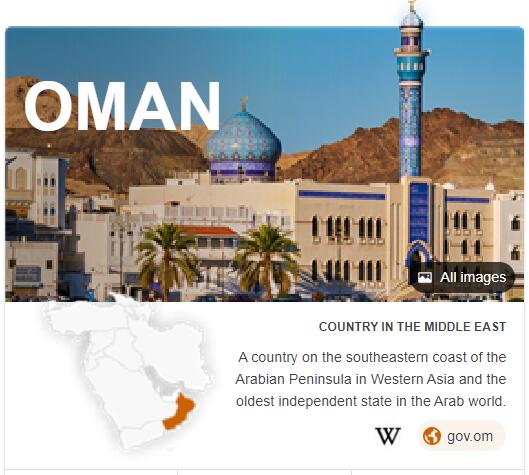 Oman is an absolute monarchy, ruled by a sultan. The country has no written constitution, but in 1996 the Sultan issued a decree stating that the country is a hereditary, absolute monarchy. Political parties are not allowed and the country does not have parliament with legislative authority.

While Oman is not a democracy according to internationally understood norms, the country has established structures for consultation between the ruling monarch and the people, in line with Islamic traditions and Omani customs. The established advisory bodies have no formal power, but facilitate consultations.

Oman’s monarchy is a sultanate, and the sultan has unlimited power. He himself represents the legislative as well as the executive, and gives laws by decrees. The Sultan is the Head of State and at the same time acts as Minister of State, Foreign, Finance and Defense. See ABBREVIATIONFINDER for how OM can stand for Oman.

Oman is not a democracy and does not have an independent parliament. The country, on the other hand, has two advisory assemblies: One Council, Majlis al-Shura (the “Consultation Council “) was established in 1991, and is elected from 2000; from 2003 with universal suffrage. It has 84 representatives. The second, Majlis al-Dawla (“Cabinet”), consists of 83 members appointed by the sultan. The government is regarded as an upper house; the consultative council as a lower house. In the 2003 elections, all Omanis over 21 years were given the right to vote, with the exception of members of the military and security forces. Following an electoral reform in 2015, the elections are controlled by the legal system.

To advise himself as head of state, the Sultan has a ministerial council, Majlis al-Wuzara, with ten designated members.

The power in Oman is strongly centralized, linked to the sultan. Regional and local government are also closely linked to the Sultan as an institution; partly through traditional representatives of the Sultan (Welsh) and elected councils.

Sultan Qaboos bin Said, who came to power in 1970 and ruled until his death in 2020, modernize Oman in a number of areas, but the political system is still characterized by ancient traditions.

Oman is divided into five regions (mintagat) and three governorates (muhafazat), which again consists of a total of 59 districts (wilayat). The local government is taken care of by a combination of representatives of the Sultan (Welsh) and local councils.

Oman’s legal practice is based on Islamic law through an ibadi interpretation of sharia, which handles personal matters. There are also civil and economic courts, as well as courts that deal with criminal cases in the first instance; then appeals courts and a Supreme Court. The Supreme Court is headed by the Sultan.