According to Countryaah.com, with capital city of Niamey, Niger is a country located in Western Africa with total population of 24,206,655. 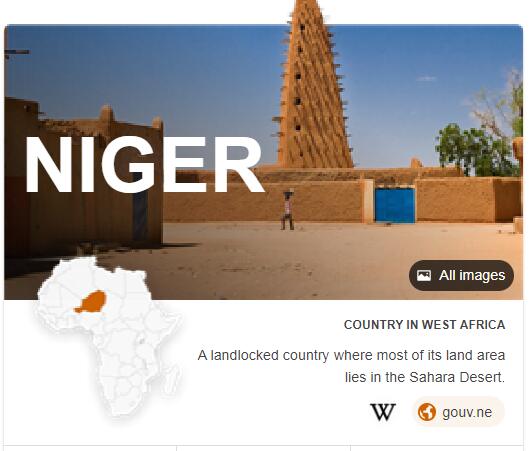 Following the 1999 constitution, Niger is a unitary state, presidential, and with the intentions of a democratic republic, but the country is politically very unstable. The president is elected in the general election for five years and can be re-elected once. He has wide powers and is both a government leader and military commander. He also appoints a prime minister who has certain executive responsibilities. Legislative power has been added to a national assembly of 113 members, elected for five years in general elections and with multi-party participation. Niger is characterized by political and ethnic tensions.

The opposition presidential candidate is stopped

Nigerian Constitutional Court has stopped opposition leader Moden leader Hama Amadou from running in the December presidential election. However, the ruling party PNDS candidate Mohamed Bazoum, former interior minister, gets the green light. The court gives no explanation for Amadou’s rejection as a candidate, but he has previously been convicted of smuggling infants. He was pardoned in March at the outbreak of the corona pandemic when there was a fear of a rapid spread of infection in the country’s overcrowded prisons. Another dozen people are stopped from running, while about 30 are approved. According to the constitution, President Issoufou cannot stand for re-election because he has served two terms.

The constitutional turning point of 1992 seemed to open a new phase in the political life of the Niger, while on the social level the country remained marked by strong tensions deriving from endemic poverty and backwardness. Nor had the ethnic conflicts been resolved until then, especially as regards the question of Tuareg nomads: returning to Niger at the end of the 1980s from Libya and Algeria, between 1990 and 1992 the Tuareg had more resumed clashes with the army claiming administrative autonomy for the northern regions in which they had settled.

With the birth of the third republic, based for the first time in the country’s history on a pluralistic political system, legislative elections were held in February 1993 which led to the formation of a civil coalition government between democratic and socialist groups. The presidential elections in March of the same year saw the victory of the Muslim M. Ousmane, the first exponent of the Hausa tribe (the largest in the country) to assume the highest office of the state and leader of the Convention démocratique et sociale-Rahama.

The first initiative of Ousmane and the new government led by M. Issoufou was addressed to the question of the Tuareg: after months of negotiations, thanks also to the mediation of France, in June 1993 a first truce was agreed which provided for the demilitarization of the north of the country and economic aid to the population. Although some dissident groups opposed the agreement, negotiations continued until a commission was set up to define an administrative reorganization of the country (January 1995). In the meantime, the social conflict has re-exploded in schools and in the public sector due to the economic crisis, exacerbated after the devaluation of the CFA franc by 50 % in January 1994, opened a phase of serious political instability: in September Issoufou resigned due to the strong contrasts that opposed him to the president on their respective areas of competence.

In the early elections of January 1995, the Mouvement national pour une société de développement Nassara (MNSD) won the majority of votes, and the party secretary, H. Amadou, headed a coalition cabinet. Engaged like previous governments in negotiations with the representatives of the Tuareg minority, and supported not only by France, but also by Algeria and Burkina Faso, in April 1995 the new executive concluded with the representatives of the Tuareg a peace agreement that provided for the insertion of the rebels in the armed forces of the country and the commitment to consolidate the process of administrative decentralization under the control of the three mediator countries. Nonetheless, the unresolved tensions between government and presidency over their respective prerogatives led to an institutional crisis (July 1995): in a climate of social tensions (public employment and the world of schools and universities on several occasions they were the protagonists of strikes up to violent demonstrations December students in the capital Niamey) the situation resulted in the military coup (January 1996), led by Colonel I. Baré Maïnassara who suspended the Constitution, dissolved the national assembly and the parties, and declared a state of emergency.

The condemnation by Western countries, which suspended all forms of non-humanitarian aid, and by the International Monetary Fund, which interrupted the ongoing negotiations with the Niger, as well as the consequent threat of economic isolation of the country, favored the formation of a new civilian government led by the deputy governor of the Central Bank of West African States, B. Adij (January 1996), and the reaching of an agreement between the political forces for a return to democracy. A new constitution on a strongly presidential basis was approved in a popular referendum in May 1996.

In July, Baré Maïnassara was elected president while the legislative elections, held in November and boycotted by the opposition due to the lack of serious democratic guarantees (also denounced in October by Amnesty International), saw the affirmation of the Union nationale des indépendants pour le renouveau démocratique (UNIRD), formed by the parties close to the president. The new government, led by A. Cissé (December 1996), soon had to face the explosion of strong political opposition: in February-March 1997new strikes affected public services and schools, and subsequently other productive sectors, while the opposition and trade unions continued to call for new elections. In the north of the country, meanwhile, a strong conflict persisted: Tuareg dissident groups, led by the Organization de la résistence armée (ORA), judged the integration measures of the rebels in the national armed forces and the international economic aid themselves inadequate.

Following the assassination of Baré Maïnassara (April 1999), a Conseil de réconciliation nationale was established, led by Major DM Wanke, which assumed full powers and in August promulgated a new Constitution that limited the prerogatives of the president. The elections of November 1999 saw the victory of the MNSD, whose candidate M. Tanja was elected to the presidency.