According to Countryaah.com, with capital city of Amsterdam, Netherlands is a country located in Western Europe with total population of 17,134,883. 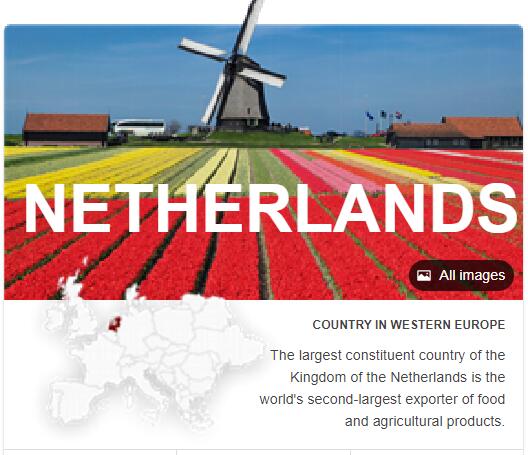 The Netherlands has been a constitutional monarchy since 1814 and since 1848 has a parliamentary system. With the introduction of universal suffrage for men in 1917 and for women in 1922, the country also became a democracy.

The monarch, who is the country’s head of state, has essentially ceremonial powers. The crown is now inherited by the monarch’s oldest children regardless of gender. Since Queen Beatrix abdicated in 2013, King Willem-Alexander reigns. The real power in the Netherlands since the mid-19th century lies not with the monarch but with Parliament and the government responsible to Parliament. See ABBREVIATIONFINDER for how NL can stand for Netherlands.

The House (Staten-Generaal) consists of two chambers. The first has 75 members, who are elected indirectly by the elected provincial assemblies (Provinciale Staten) every four years. The primary role of the First Chamber is to review legislative proposals adopted in the Second Chamber. Formally, the first chamber can only vote yes or no, but by threatening to veto it can in practice get through changes or additions. The veto right is used very sparingly. The first chamber has no influence over the formation of government, and it is before the second chamber that the government is responsible.

The 150 members of the second Chamber have a term of four years and are elected by direct elections, based on general and equal voting rights for anyone over the age of 18. The eligibility age is also 18 years. New elections are very common – more than half of the elections since the Second World War have been held after less than four years.

The electoral system is strictly proportional and the whole country constitutes a constituency. There are no barriers to small parties, which means that all parties that manage to win 1/150 of the votes, ie. 0.67%, gets mandated. This has the consequence that a large number of parties, usually between nine and eleven, sit in Parliament, which makes government formations complicated and drawn out. All governments are based on coalitions between two or more parties. Minority governments are unusual, except as transitional governments pending new elections.

Regionally, the Netherlands is divided into twelve provinces: Noord-Holland, Zuid-Holland, Zeeland, Utrecht, Noord-Brabant, Limburg, Gelderland, Overijssel, Drenthe, Flevoland, Groningen and Friesland. Each province has a people-elected assembly, a governing council appointed by that assembly and a governor appointed by the government. The provincial assemblies appoint representatives to the first chamber every four years, but otherwise have relatively limited tasks. In addition to its general oversight of the province’s internal development, the provincial councils have traditionally played the role of monitoring the vital dams to the sea facing the Netherlands. Technically, the provinces are monitoring the regional water authorities that manage the dams.

The number of municipalities has gradually decreased in recent decades and now amounts to 388. These are led by elected councils together with a mayor, who is appointed by the government. The vast majority of the municipalities’ budget consists of government grants and only a small part of local taxes.

Political life in the Netherlands was characterized by the Verzuiling system for a long time, as did society at large . The term comes from the Dutch pillar (‘pillar’) and is based on the fact that society was strongly divided around religious and socio-political affiliation, which affected people’s social and political life and, for example, what associations you belonged to and how you voted. The division was institutionalized and very strong interest groups have emerged, e.g. several different central trade unions. The interest groups were seen as the pillars on which Dutch society rests, and the interaction and compromises between them determined the political life in the Netherlands.

The starting point for the system was the historically contradictory relationship between Catholics and Reformers. The religious groups organized themselves along confessional lines in Catholic and Reformed parties and organizations. Non-denominationally committed have had common so-called humanist organizations, but have also been divided according to the dividing line socialist-non-socialist ideology.

However, the Verzuiling system has gradually been relaxed since the 1960s and no longer dominates politics, but the tradition of broad compromises lives on.

In response to a slowly declining voter support, in 1980, three Reformed and Catholic parties joined in a joint Christian party, the Christian Democratic Appeal (CDA). CDA – and its predecessors – participated in all governments between 1917 and 1994, often as a dominant party and with a voter support of about 30%. During the last elections, however, the party has seen its support gradually decline. Despite an improvement from 8.5% in the 2012 election to 12.5% in the 2017 election, the result is CDA’s second worst in the party’s history.

The Netherlands’ other major party historically is the Social Democratic Party of Labor (Labor Party). Despite ideological differences, the party has repeatedly sat in government with the CDA, most recently during the 2006-10 term. The PvdA’s voter support dropped slightly during the 1990s. In the new election in 2012, the party made a recovery and formed the government together with the VVD (see below). The 2017 election was a big disappointment, the PvdA made the biggest loss a Dutch party ever made and dropped from 24.8 to 5.7% of the vote.

People’s Party for Freedom and Democracy (VVD) is a liberal party, initially anti-confessional but now with a strong focus on market economy principles. The party, which has had varied voter support over time, has been part of many governments, mainly with the CDA. In the 2010 election, for the first time, the VVD became the largest party in parliament with just over 20% of the vote. Executive Vice President Mark Rutte became Prime Minister of a government consisting of the Executive Director and the CDA, supported by the Executive Director of PVV (see below). After PVV withdrew its support to the government in connection with budget negotiations in 2012, the government resigned and new elections were announced. After the recent election, Rutte was assigned the task of forming a new coalition government, now together with the PvdA. As the first government in almost 20 years, this government managed to remain throughout the term of office. In the 2017 election, the VVD backed slightly, from 26.5 to 21.3% of the vote,

In the last decade, the established parties have been challenged by new forces. Shortly before the 2002 election, Pim Fortuyn formed an immigration-critical party, which won 17% of the vote. Nine days before the election, Fortuyn was assassinated and the party, which was part of the government formed after the election, gradually collapsed and ceased to exist a few years later.

However, the criticism of immigration was pursued by other parties. In 2005, Geert Wilders resigned from the VVD and formed the Party for the Vrijheid (PVV), a party that is considered to be strongly anti-immigrant, with the Cape directed at Islam. In the 2010 election, the party became the third largest party in the Dutch parliament. The party managed to retain this position in the new election in 2012, despite losing a third of its voters and receiving only 10.1% of the vote. Before the 2017 election, PVV looked to be the largest party, but with 13.1% became the second largest party.

In addition, there are another nine parties in Parliament, three of which have more than 5% of the vote: the Social Liberal D66, the environmental party Groen Links (GL) and the Socialist Party. Of these, only D66 has been a member of the government. GL accounted for the largest increase in the 2017 election, from 2.3 to 8.9%.

In the 2017 election, the trend continued for the former major government parties to lose voters, despite a slight recovery for CDA. The two government parties, the VVD and the Labor Party, which have been tightening policies during the euro crisis, both backed down. The last days of the election campaign were marked by a diplomatic quarrel with Turkey, which is believed to have favored Prime Minister Rutte and the VP, who made a better choice than expected. After the failed government cooperation in 2010-12, and because of the party’s harsh rhetoric, almost all parties had already stated before the election that they did not intend to cooperate with PVV, which will thus have difficulty exerting influence during the term of office. The strong fragmentation of Parliament means that cooperation between at least four parties is needed to form a majority government.

The central parts of the legal system are codified in large statutes, the most important of which are the Civil Code (Burgerlijk Wetboek), the Civil Procedure Act, the Criminal Code and the Criminal Procedure Act. A new civil law is being introduced gradually; it is intended to replace both the older civil law and the trade law. The legal order in the Netherlands has been affected by its membership in the EU. The judicial system consists mainly of cantonal and district courts, appellate courts and a Supreme Court of Appeal (Hooge Raad). The death penalty was abolished in 1982; the last execution took place in 1952.

Heads of State and Regents