According to Countryaah.com, with capital city of Chisinau, Moldova is a country located in Eastern Europe with total population of 4,033,974. 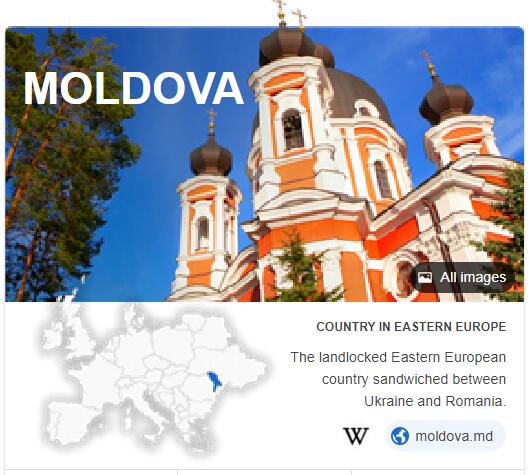 The legislative authority has been added to a parliament with 101 members, elected in the general election for four years.

Moldova is divided into 32 districts, three urban areas and the two autonomous regions, Gagausia and Transnistria (where the latter’s status is unclear), and these remain in local units. There are local elected bodies. See ABBREVIATIONFINDER for how MD can stand for Moldova.

The country has a separate constitutional court and, by the way, a Supreme Court and a number of lower level courts.

Moldova’s flag was put into use in 1990 and is divided into three equally wide vertical fields in blue, yellow and red (counted from the pole) – the same colors as the Romanian flag. The yellow field is coated with the national weapon.

The coat of arms

The national coat of arms shows a golden eagle holding a yellow cross in the beak and in the claws an olive branch and a yellow scepter. On the chest, the eagle wears a two-piece shield (red over blue) coated with a yellow stylized bull’s head surrounded by an eight-bared star, a stylized flower and a crescent, all in yellow.

Moldova is one of Europe’s poorest countries, and the economic situation has been very difficult in the years since independence. Gross domestic product (GDP) dropped drastically, reaching a minimum in 1999 with 33 percent of 1989 value. The country was the SUS country where the decline lasted the longest. From 2000, there was economic growth until 2008. However, growth was not strong enough to eliminate poverty, and with the international financial crisis in 2009, Moldova again experienced economic decline. From 2010, uneven growth began again. In 2015, however, GDP was still lower than in each of the years 1989–1991, but twice as large as in the bottom year 1999. It is estimated that over a quarter of the working-age population work abroad.

In addition to the general conversion problems common to the former Communist states, Moldova has had special problems, as the economy has been closely interwoven with the former Soviet Union. The country has virtually no energy production and is completely dependent on Russia and Ukraine. This has made the country vulnerable to political pressure from Moscow. The fact that much of Moldova’s industry is in the Transnistria mining region has also significantly weakened Moldova’s economy. The 1992 war also restored the economy. In addition, severe drought and other natural disasters have hit the agricultural land in Moldova for many years particularly hard.

In the February 2001 parliamentary elections, widespread poverty and a miserable economic situation led to the victory of the Communist Party (50.1 percent of the vote) and enough representatives to decide the presidential election. The Communist Party had already become the largest party in 1998, even though it had then had to form a central coalition government. In April 2001, Parliament elected Communist leader Vladimir Voronin as the country’s president.

The communists also won the election in 2005. But then they needed help from parts of the opposition to secure re-election of Voronin as president. Following the 2001 elections, the new rulers proposed closer cooperation with Russia and tried to make Russian the official language next to Moldovsk (Romanian) with compulsory Russian education in primary school. There were major demonstrations against this in 2002, and the authorities had to give up the hard line. Also, the difficulty of finding a solution to the Transnistria conflict has led to the communists opening up to more European integration.

In 2008, Moldova got its first female prime minister, Zinaida Greceanîi from the Communist Party.

At the parliamentary elections on April 5, 2009, the Communist Party again became the largest with 49.5 percent of the vote and 60 of the 101 seats. To decide the presidential election alone, a party needed 61 seats. The turnout was 57.5 percent. After the announcement of the preliminary election results came large demonstrations, mainly of youth. The demonstrations were anti-communist in nature and disputed that the elections had been conducted properly. International observers rated the election largely passed, but had many critical comments regarding the election campaign and access to the country’s most important mass media.

The demonstrations eventually turned to violent riots, and the parliament building was set on fire. President Voronin blamed foreign forces and the Romanian ambassador was expelled. Several Romanian and other foreign journalists were denied entry or encountered other obstacles in their work.

After a few days, however, Voronin agreed to count the votes again, which the Constitutional Court later ruled. The opposition boycotted the new census and justified it primarily because it was the electorate, not the census, that had to be reviewed to reveal if election fraud was significant. The new count only resulted in minimal adjustments to the result and no changes in the distribution of seats. After the Communist Party in parliamentary polls in May and June received only 60 votes for its presidential candidate, and not 61 as needed, a new election was printed in accordance with the Constitution.

The new parliamentary elections took place on July 29, 2009. The turnout was 58.8 percent, slightly higher than in the April elections. International election observers were mainly satisfied with the conduct of the election itself. But even during this election, the election campaign was characterized by the various communists being favored in the mass media; both in state television and in the largest private television channel.

The Communist Party was still by far the largest party with 44.7 percent of the vote. There was a clear decline from April, when the party gained 49.5 percent. The mandate went down from 60 to 48. The four opposition parties, which exceeded the 5 percent threshold, received a total of 53 seats. In August, they pledged to cooperate on government by forming the “Alliance for European Integration”, and in September 2009 Vlad Filat of the Liberal Democratic Party became prime minister in a coalition government with a majority in parliament.

The most prominent party in the election was the center / left-leaning Democratic Party (Partidul Democrat), which received 12.5 percent of the vote and became the third largest of the non-communist parties. At the April election, the party had only received three percent of the vote and did not reach the bar. One explanation for the great progress was that Marian Lupu had become a new party leader. He had previously been Minister of Economy in a Communist government, and from 2005 to 2009 he was President of the National Assembly. In the summer of 2009 he left the Communist Party and joined the Democratic Party, where he was immediately elected leader.

Lupu, who is considered a technocratically oriented politician, has criticized communists for a lack of reform. When, after the April 2009 election, a new president failed to succeed, Vladimir Voronin continued as acting president. Nor was the parliament elected in July 2009 able to get elected president, since no grouping had an adequate majority (three-fifths).

Voronin resigned his position as acting president on September 11, 2009. Until a new president could be elected, the president of the newly elected National Assembly, Mihai Ghimpu of the Liberal Party (Partidul Liberal), served as the country’s interim president. The last possible attempt to elect the President of this Parliament took place on December 7, 2009, with no results. This would again necessitate new elections to parliament. Since the Constitution requires at least one year to pass between each time the parliament dissolves, a new parliamentary election could not take place before autumn 2010.