According to Countryaah.com, with capital city of Bamako, Mali is a country located in Western Africa with total population of 20,250,844. 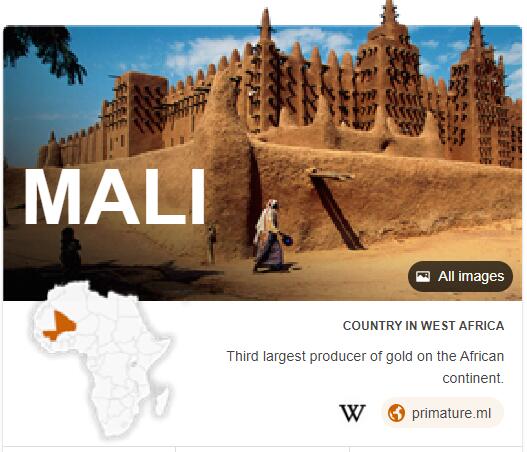 Mali was considered to be one of West Africa’s most stable democracies after the introduction of multi-party systems in 1992. In March 2012, however, a coup was carried out. Although the coup makers were soon replaced by a civilian government, the country remained troubled by a prolonged armed conflict with Tuareg separatists in the north and recurrent Islamist terrorist attacks.

Mali’s constitution was adopted in a referendum in 1992. According to it, Mali has strong presidential power and multi-party systems. The president, who holds the executive power, is elected in general elections every five years. He is also commander-in-chief and appoints the prime minister, who in turn appoints the government. All presidents since independence have been men.

The Legislative Power comes to the National Assembly with 147 members who are also elected for a term of five years. See ABBREVIATIONFINDER for how ML can stand for Mali.

In 2017, a referendum on a proposal for a new constitution was suspended after extensive protests. The critics felt that the proposal would mean that the president was given too much power.

Under its first president, Modibo Keïta, Mali became a socialist one-party state. Keita was overthrown in a military coup in 1968, led by Moussa Traoré, who established a more market-oriented dictatorship. In March 1991, the demands of democracy led to bloody confrontations between citizens and the army. The president was arrested and a transitional government took office under Lieutenant Colonel Amadou Toumani Touré. A national conference was organized in August 1991 and a new democratic constitution was drafted. In 1992, Alpha Oumar Konaré (born 1946) was elected president. He was re-elected in May 1997 with 96 percent of the vote in an election that was largely boycotted by the opposition.

When Konaré resigned in accordance with the constitution in 2002, he was succeeded by Amadou Toumani Touré. He had won great respect after the overthrow of Traoré by handing over power to civilian politicians. He was running as an independent candidate, but with the support of a number of opposition parties. The leading party since democratization has been the Alliance pour la demokratie au Mali (ADEMA). However, its dominance has weakened, and in the parliamentary elections in 2002, the party for the first time was without its own majority.

During Amadou Toumani Touré, Mali was led by a unifying government. The president was re-elected in 2007 with 71 percent of the vote. In the same year, ADEMA again received the most votes in the parliamentary elections and the party-led alliance received 113 of 147 seats in the National Assembly. In March 2012, just over a month before the presidential election in which Touré’s successor was elected, he was deposed in a military coup carried out by lower-level commanders. These formed a national council led by Captain Amadou Sanogo (born circa 1972), who said he was willing to surrender power to elected politicians as soon as the army could guarantee the security of the country again.

The background to the coup was the armed conflict between the nomadic Tuareg people and state power which has been the biggest domestic political problem since the 1990s. The conflict has its roots in contradictions that arose when Tuaregians returned to Mali after going to Algeria and Libya during the severe drought in the Sahel region in the 1970s. The Malian army was less equipped than the rebels, which were reinforced when armed Tuaregians returned from Libya in 2011, serving under the dictator Muammar al-Khadaffi. The Malian government’s way of dealing with the situation caused a great deal of dissatisfaction among the soldiers, which led to the military coup.

After the coup, the junta was isolated internationally while the Tuareg rebel group Mouvement National pour la Libération de l’Azawad (MNLA) took control of the cities of Gao and Timbuktu and thus the northern part of the country. The independent state of Azawad was proclaimed April 6 but was not recognized internationally. The following day, the junta gave up and joined the West African cooperation organization ECOWAS’s demand for a return to civilian rule. Parliament Speaker Dioncounda Traoré (born 1942) was appointed interim president, but the junta continued to have great influence for a period; However, Sanogo was arrested in November 2013 and was later charged with, among other things, involvement in murder.

In the north, the MNLA and its allies, the Islamist guerrilla movement, declared Ansar al-Din, an Islamic state, but shortly thereafter, disputes broke out between the groups. Ansar al-Din, in collaboration with al-Qaeda in the Islamic Maghreb (Aqim), took control of northern Mali and introduced sharia laws. In January 2013, when southern Mali was also threatened by the rebels, France sent troops to the country, which together with the Malian army and an ECOWAS force managed to push back the Islamists. In June 2013, the MNLA temporarily laid down its weapons, and in July of that year a regular UN force, whose body consisted of the soldiers from ECOWAS, formally assumed responsibility for the military effort against the Islamists.

In August 2013, Ibrahim Boubacar Keïta was elected new president after receiving 78 percent of the vote in the second round. In the November and December parliamentary elections in the same year, Kaeïta’s party Rassemblement pour le Mali (RPM) was clearly the largest. Of the 147 MPs, 14 (ten percent) were women.

The country has also continued to suffer from violence that has harmed the casualties of government soldiers, rebels, terrorists, UN soldiers and civilians. The fact that the five member countries of the G5 Sahel (Burkina Faso, Mali, Mauritania, Niger and Chad) partner organization in 2017 decided to form a joint force to meet the threat posed by militant Islamist groups has not changed this relationship.

The judiciary consists mainly of public courts, an appellate court and a supreme court. The legal order is French-inspired and codified according to the French model, but traditional customary law, characterized by Islam, has affected, among other things. the family law rules. The death penalty remains in the penal code but is de facto abolished in 1980.

Mali’s modern history has been characterized by the struggle for northern Mali (see History). Tough fighting between government forces and rebels has led to widespread violations of human rights.

According to human rights organizations, the Malian soldiers have committed several abuses in their fight to withdraw northern Mali from the rebel groups. Summarized executions, forced disappearances and torture have been prevalent during the armed conflict, and attacks have been directed at suspected Islamist rebels and alleged collaborators. Reports show that the government’s security forces continued to commit the same types of crime even after the installation of new President Ibrahim Boubacar Keïta in late 2013. Few have been held accountable for the crimes as the impunity is widespread in the country.

Mali had the freest media landscape in Africa before 2012 when disputes changed. During the year, several journalists were arrested and tortured by the military and by Islamist rebels. Attacks on journalists diminished over the course of the year, but the deterioration of freedom of expression and press in the country is almost unparalleled. Since 2010, the country has lost nearly 100 placements in Reporters Without Borders Press Freedom Index, and in 2015 stands 118 out of 180.

War crimes and other serious abuses were perpetrated by all sides during the fiercest fighting between April 2012 and February 2013. Extremist groups and rebel movements, including the Tuaregan rebel group MNLA, committed serious crimes against both civilians and soldiers. Sexual violence, summary executions, torture and the use of child soldiers have been reported to occur to a large extent from the rebel side. A number of schools were destroyed by bombings as data pointed out that Islamist groups used these as command centers.

Children are generally vulnerable in Mali. Child labor in agriculture, household work and mining are common. The government has certainly adopted an action plan to protect children under the age of 18 from dangerous tasks, but this has not been implemented. Minors are exposed to health risks to a large extent, such as exposure to mercury and accidents in connection with gold mining.