According to Countryaah.com, with capital city of Tripoli, Libya is a country located in Northern Africa with total population of 6,871,303. 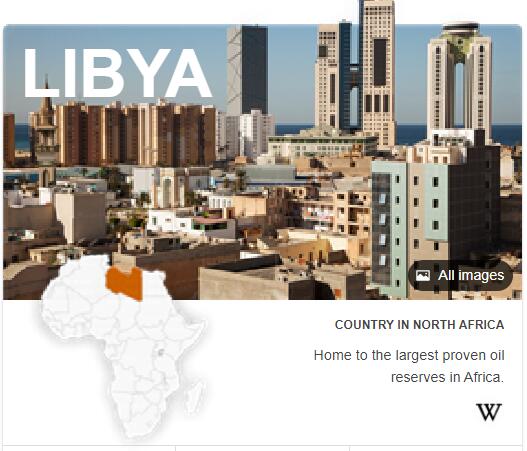 Since Muammar al-Khadaffi’s fall in 2011, no government has controlled the entire country. Since 2014, there have been at least two rival governments with separate parliaments. The country has gradually been divided into different parts ruled by factions fighting each other.

By 2019, the political process had hardly brought the country closer to a functioning democracy, but rather led to increasing disintegration and lawlessness. See ABBREVIATIONFINDER for how LY can stand for Libya.

From March 2, 1977, until the Civil War in 2011, there was no real constitution in Libya. The country was governed in accordance with a declaration of “surrender of power to the people” (jamahiriya), according to the directives in Muammar al-Khadaffi’s “Green Book”. According to it, “direct democracy” prevailed where all representation by election was prohibited, as was any party formation. In practice, power was thus concentrated on the leader and his inner circle, which included family members and security managers. In practice, Khadaffi served as head of state, but his formal title was the leader of the Revolution.

People’s congresses in districts and professional groups (at least once a year) appointed delegates to a general people congress for the entire country. Its secretariat served as a government, and the secretariat members were the country’s ministers. The revolutionary committees, which were also established in 1977, were, in principle, intended to promote direct popular sovereignty, but in practice functioned almost as a political party. Libya’s embassies abroad were renamed public offices, though with unchanged functions.

Some economic and political liberalization occurred in 1987. Among other things, a number of political prisoners were released and contacts were made with the opposition. A short time later, however, the political climate hardened again. Above all, the Islamist opposition suffered repression. Alongside the National Congress and Revolutionary Committees, the army played a crucial role in politics. However, it never came to be the army made up of all the people in the weapons that were deployed, but remained a separate, armed force.

After the civil war and the overthrow of Khadaffi in 2011, a National Transitional Council (NTC) was formed, which adopted a temporary constitution pending the drafting and ratification of a new constitution. A Constituent Assembly was elected in February 2014 and adopted a draft constitution in July 2017. The draft declares that Libya is a democracy with Islam as a state religion. According to this, the judiciary would be independent. Human rights, including religious freedom and women’s rights, would also be guaranteed, but these guarantees have by no means been fulfilled in 2019.

Parliament consists of a chamber of 200 directly elected members; 32 places are reserved for women. In September 2018, Parliament passed a law regulating the referendum required for the final adoption of the Constitution. The law was handed over to the national electoral commission appointed to prepare the referendum.

Due to the turbulence that characterized the country, the 2019 referendum could not have been carried out.

Libya is a distinctive clan community. Loyalty to the clan or local community has been more important to most people than the sense of belonging to the colonial nation. There have also been significant contradictions between the country’s western part, Tripolitania, and the eastern one, Cyrenaika. The influence of radical Islamists, who reject democracy, is strong in some areas.

These factors have contributed to Libya’s attempts to build a functioning democracy have encountered great difficulties. The process began in 2011 when a coalition of rebel forces took power. Muammar al-Khadaffi had ruled the country for over four decades. Getting Libya to take the step from stern dictatorship to a democratic, unified and modern state proved to be an extremely complicated task.

Even in the fall of 2019, the political process had hardly brought the country closer to a functioning democracy, but rather led to increasing disintegration and lawlessness.

After the 2011 revolution, the National Transition Council (NTC) became the country’s governing authority, internationally recognized as a government. An election to the Transitional Parliament was held in 2012; 80 of the 200 seats were reserved for affiliated candidates and 120 for independence. Parliament, called the General National Council (GNC), was periodically paralyzed by contradictions between conservative Islamists and more liberal members.

In January 2014, the government cracked down as the party representing the Muslim Brotherhood jumped off. In the next parliamentary elections, participation was low, below 20 percent, and due to unrest and boycotts, only 188 seats could be added. A coalition of militia groups took up arms in July 2014, forcing the newly appointed parliament and the internationally recognized government to flee to Tobruk in northeastern Libya and re-established parts of GNC as government, the National Salvation Government, in Tripoli.

In December 2015, close to one year of negotiations were concluded during the UN mediation with the signing of an agreement, the Libyan Political Agreement (LPA). Under the agreement, Libya is governed by a presidential council, the Presidential Council (PC), headed by Fayez al-Sarraj (born 1960), and operates through a single government, the Government of National Accord (GNA).

The idea was GNA would be backed by the parliament, the House of Representatives (HoR), which was formed after the 2014 election and represented the hitherto internationally recognized government, but this has not happened without HoR remaining in Tobruk. Parallel to these two governments is the GNC, which goes back to the Transitional Parliament of 2012 and resurrected after the 2014 power struggle, remains in Tripoli, though with very limited power functions.

Thus, in the fall of 2019, there were three rival centers of power in Libya: the internationally recognized GNA based on a naval base in Tripoli, HoR (also called the Council of Deputies) in Tobruk and GNC or the National Salvation Government in Tripoli.

The army, under its chief Khalifa Haftar (born 1943), appointed by the Tobruk government, also has a prominent role in the Libyan power struggles, more recently as armed protector of the HoR. Against the army are mainly Islamist groups, some of them affiliated with the al-Qaeda terrorist organization , but in addition, a large number of other militias with varying loyalties operate in the country. The largest and most important militia groups are found in the western port city of Misrata.

The army receives support from Egypt, which sees it as vital to stop Islamist and jihadist movements from expanding their influence eastward. Since the end of 2014, the Islamic State terror organization has also exploited the prevailing chaos to establish presence in various parts of Libya.

The legal system is traditionally characterized by Egyptian and thus also French law. The state court organization is represented by a supreme court. Islamic law plays a major role in Libya, where Family law cases are decided by religious, Islamic courts. The death penalty is punished for some serious crimes.

The disintegration that has characterized Libya since the collapse of Muammar al-Khadaffi in 2011 has led to a further deterioration in the human rights situation, which was already inferior at the outset. Although laws that protect human rights are formally in place and most international conventions have been ratified, its impact is extremely limited.

Both state institutions as well as militia groups and other parallel powers violate most principles in this area. Social and economic rights have also been pushed back as the economy has reversed and the authorities have dropped the grip on social functions.

Cohesion within clans, with cultural traditions such as kits, constitutes a stabilizing factor, which, however, does not reach international standards regarding respect for the rights of individuals. The civil society brought to life during the Arab Spring of 2011 has been marginalized.

At the same time, international transparency has been reduced by UN agencies and other international actors being forced to reduce their presence due to the uncertain situation in the country. Local journalists are very vulnerable. In Reporters Without Borders Press Freedom Index, Libya received 162 out of 180 countries surveyed in 2019, which is a very substandard rating.

The judicial order is controlled by a number of actors, both governmental and non-governmental, often linked to various militia groups, which rarely offer legal processes. The death penalty is legal but no executions have been carried out since 2010. Reports on extrajudicial executions, politically motivated murders and disappearances, on the other hand, are common and few attempts are made to prevent these or prosecute the perpetrators. Particularly vulnerable are human rights activists and employees in the judiciary such as judges and police.

Broadly speaking, Libya’s legal practice is characterized by corruption and impunity. A ban on torture was introduced after the revolution in 2011, but is not complied with in either state or extra-judicial prisons. Rape and other sexual abuse are common and affect both women and men. The victim’s situation is aggravated by the strong stigma surrounding the abuse. The stigma helps make rape an effective and long-term weapon in conflicts between rival groups.

Women have worse opportunities than men to assert themselves in society, have limited freedom of movement and are more often subjected to sexual abuse. Rape, by law, entails many years in prison. However, this can be avoided by the perpetrator marrying the victim.

Marital rape is not recognized as a crime. Family law issues are generally handled in accordance with Sharia law, which severely limits women’s rights. Although marriage formally requires contractors to be at least 18 years of age, child marriage has become more common in the wake of conflicts, which usually means that girls are given away in financially stressed families.

Boys are at risk of being recruited as child soldiers, both in state-controlled units and by various militia groups. Some of these are linked to al-Qaeda and also the Islamic State (IS) terrorist organization, which since 2014 has established itself in several parts of Libya, where by offering competitive salaries, recruits from poor neighboring countries are also attracted. From these and other African countries, migrants also gather in Libya, where human smugglers can act fairly undisturbed and arrange transports across the Mediterranean to Europe.

In anticipation of such transport, many migrants are subjected to severe abuse by various groups that keep them detained. In addition to the migrants, which in 2019 were estimated to be between 700,000 and 1 million people, there were about 350,000 internally displaced persons who sought protection from the unrest in the country.

With the support of the EU, Italy signed an agreement with Libyan authorities in 2017, which in exchange for assistance undertook to stop refugee boats. Since then, the number of migrants who have arrived in Italy has drastically decreased, while more people have drowned in the Mediterranean and the conditions of those who have been returned have deteriorated further. Many are interned in camps with very substandard conditions.

About 97 percent of the population are Sunni Muslims. Sectarian attacks, including from IS-affiliated groups, have been targeted both at religious minorities such as Christians and against followers of other directions within Islam such as Sufis.

Homosexuality is illegal and all sexual acts outside of marriage are prohibited and subject to harsh punishment. Gay people are also attacked by various armed groups.