According to Countryaah.com, with capital city of Vientiane, Laos is a country located in Southeastern Asia with total population of 7,275,571.

Following the constitution of 1991, Laos is a people democracy with the revolutionary party of the Laotian people as the state party. That is, this party – a Communist Party – has the government and is the only political party allowed. The supreme executive has been appointed a state president, elected by the National Assembly for five years. The president, who is also the party’s secretary general, is a military commander, appoints the government and ratifies laws.

The National Assembly is elected in the general election for five years from among candidates from a list approved by the ruling party. With the exception of a small number, the vast majority of representatives belong to the ruling party. The Assembly adopts laws and can remove the president and adopt distrust proposals against the government. In reality, however, its role is more modest. It meets for shorter sessions and works between sessions through a standing committee. 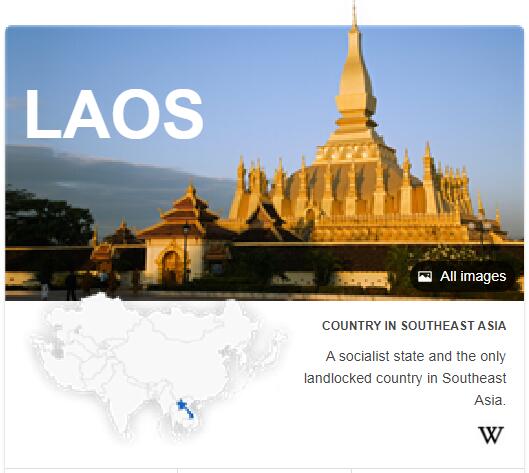 Administratively, Laos is divided into 16 provinces, one area of ​​special status and the metropolitan area. Laos is distinctly unitary state, although the non-Laotian groups in the north have some autonomy. The president appoints both the provincial governors and the mayors in the municipal areas, while the prime minister appoints a number of other local officials. See ABBREVIATIONFINDER for how LA can stand for Laos.

In the years following the Vietnam War, Vietnam had 40,000-50,000 soldiers in Laos; these were withdrawn in the late 1980s. In the battle between the communist great powers of the Soviet Union and China, Laos took the party for the Soviet Union. In 1978, all Chinese aid personnel were withdrawn, but in 1990 relations with China were declared normalized.

Economic change in prices towards the end of the 1980s, along with the collapse of the Soviet Union, forced Laos to increase relations with capitalist countries. A tense relationship with Thailand improved. The first bridge between Laos and Thailand over the Mekong at Vientiane was opened in 1994. From 1995, Laos took gradual steps towards membership in the Southeast Asian cooperation organization ASEAN, and was granted this in 1997.

Politically, Laos is closely linked to Vietnam and China, but economically Thailand has been its main partner. The EU is the second largest buyer of Laotian exports. Laos joined the ASEAN regional cooperation organization in 1997. In 2004, Laos chaired ASEAN and hosted the summit of the year. In 2008, Laos entered the ASEAN Free Trade Area and attaches great importance to this collaboration. Laos also joined ASEM (Asia-Europe Meeting) in 2004.

Allegations of discrimination and abuse against Hmong -minoriteten led to relations with the US were first normalized in 2004, ten years later than the normalization USA – Vietnam.

The initial service in Laos is a minimum of 18 months. The armed forces are linked to the Communist Party. The material is largely of Soviet origin, and much is outdated. The total force numbers for Lao’s armed forces are 29,100 active personnel, and in addition about 100,000 semi-military for local defense. Laos has no navy of its own.

The Air Force had a personnel force of 3500 active personnel, five light transport aircraft, and 19 helicopters.