According to Countryaah.com, with capital city of Nairobi, Kenya is a country located in Eastern Africa with total population of 53,771,307. 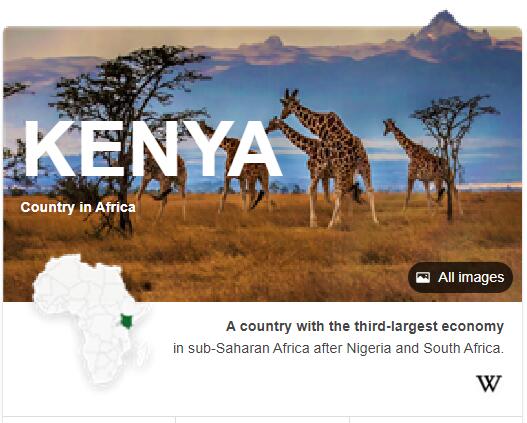 In practice, having been a one-party state from independence in 1960, Kenya introduced multi-party systems in 1991.

A new constitution was adopted by a referendum in August 2010. Two thirds of voters supported the proposal, which meant a major decentralization of power in Kenya. See ABBREVIATIONFINDER for how KE can stand for Kenya.

The president’s power was limited and a number of powers have been transferred to elected provincial assemblies by the constitutional amendment. The judiciary was fundamentally reformed, including through the introduction of a supreme court, and a new Senate, a Senate, was created in Parliament. The new two-chamber parliament can also put the president before the national court. At the same time, no one may be a member of Parliament and sit in the government.

The new constitution also meant that, for the first time, the people’s right to decent living conditions was enshrined in a Bill of Rights. A contentious but pervasive reform is the creation of a commission to review land ownership and the power to reclaim state land privatized under questionable forms. The conflict over land resources is considered to be one of the causes of the well-organized violence that erupted after the 2007 general elections.

The executive power is held by the president and the government. The president is elected in general elections for a maximum of two five-year terms. To be elected president in the first round of elections, a candidate must receive at least 50 percent of the total vote and at least 25 percent in 24 of Kenya’s 47 regions. All four presidents since independence have been men.

The country’s previous constitution was adopted in 1963, when the country became independent. Then a number of changes were made, the first in 1964 when the country was declared a republic. One-chamber parliament was introduced in 1966, when the Senate and House of Representatives merged into a national assembly. After the 1969 assassination of Tom M’boya, secretary general of the governing Kenya African National Union (KANU), the only real opposition party was banned. After three parliamentary elections with KANU as the only participant, Kenya officially became a one-party state in 1982. Multi-party systems were introduced in 1991, in 1992 a provision was introduced that the president can be re-elected only once and a constitutional amendment in 1999 reduced the president’s influence over legislative work.

The general elections held in December 2002 set the stage for KANU’s long holding of power. After several years of division within the opposition, about ten parties had joined forces in the National Alliance Party of Kenya (NAK) only five months before the elections. Along with KANU leavers, NAK formed shortly before the National Rainbow Coalition (NARC), which appointed former Vice President Mwai Kibaki as its presidential candidate. In the presidential election, Kibaki won just over 62 percent of the vote against 31 percent of KANU candidate Uhuru Kenyatta, son of the country’s first president. In the parliamentary elections, NARC received 125 of the 210 directly elected seats and KANU 64.

The formation of the NARC was not so much an expression of political agreement as a common desire to remove KANU from power. Cooperation within NARC was characterized by continued wear and tear and the movement soon split into new parties. The dividing lines in Kenyan domestic politics are not primarily ideological but ethnic; for example, former President Daniel arap Moi was often criticized for favoring members of his own Kalenjin people group at service appointments. These contradictions became clear after the 2007 elections, when protests against suspected cheating resulted in bloody clashes between primarily the kikuyu and luo people groups and extensive expulsion of civilians. The conflict began in 2010 to be investigated by the International Criminal Court (ICC) in The Hague.

This investigation cast its shadow over the elections held in March 2013. One of the main candidates for the presidential post, Uhuru Kenyatta, was prosecuted at the ICC, as was his vice presidential candidate and former rival William Samoei Ruto. However, both managed to use the prosecution to their advantage during the election movement. After a few days of delay, it was announced that Kenyatta had received just over 50 percent of the vote and thus secured victory already in the first round of elections. The second of the elections, Prime Minister Raila Odinga, appealed the result, but at the end of March, the Supreme Court ruled that Kenyatta won the election, a ruling that Odinga chose to accept. In the parliamentary elections, The Jubilee Coalition, formed by a merger of Kenyatta’s party The National Alliance, won(TNA) and Ruto’s United Republican Party (URP). Also in connection with this election, violence erupted, in several cases with a fatal outcome, but not to the same extent as in 2007. After the 2013 election, 69 out of 350 members (20 percent) were women.

The elections in August 2017 were also contested. In July, the head of information and IT issues at the Election Commission was found murdered; if the murder had any links to the election could not be determined. In the presidential election, Uhuru Kenyatta was again challenged by Odinga, winning 54 percent of the vote. However, Odinga claimed that there were irregularities and that the Election Commission was exposed to illegal data breaches. Demonstrations broke out in Nairobi and Kisumu, among others, but despite several deaths, the protests were described as relatively limited. Odinga appealed to the Supreme Court, which rejected the election results and ordered a new presidential election to be held within two months, a decision that Kenyatta also accepted. The election, which was held in October, was characterized by a low turnout. Only just over 40 percent of the country’s voters participated in the election, which meant continued support for Kenyatta, who won 98 percent of the vote. Odinga had then boycotted the election, which he considered impossible to implement correctly.

In foreign policy, Kenya has actively participated in increased economic cooperation with neighboring countries Tanzania and Uganda. The East African Community (EAC), dissolved in 1977, was re-established in 2001. Kenya is also a member of the African Union. The country has mediated in the conflicts in Sudan and Somalia, and has also joined forces in Somalia to fight the Islamist militia al-Shabab.

In addition to the domestic legislation introduced during the independence period and a number of older British laws, the courts of Kenya apply English law as it appeared on August 12, 1897, however, only insofar as the English rules apply to Kenyan conditions. African customary law as well as Muslim and Hindu law are to a certain extent followed in respect of family law and other personal matters. The judiciary is headed by an appellate court whose members are appointed by the president. The death penalty remains in the legislation but is de facto abolished in 1987.

The ethnic and political tensions during the 1990s resulted in an increased level of violence in society and a number of serious abuses. Thousands of people were killed or expelled from their homes (see History).

The state security forces have not been held accountable for the crimes (extrajudicial executions, torture and other human rights violations) committed, and this contributes to a continued uncertain situation in Kenya. The authorities also fail to investigate allegations of harassment, threats and physical abuse of journalists. In Reporters Without Borders ‘s Press Freedom Index for 2015, the country is ranked 100 out of 180.

The presence of al-Shabab in the country by the Somali terror organization makes the Somali minority particularly vulnerable to abuse and harassment in connection with the authorities’ hunt for terrorists. Reports show that the police have been involved in both torture and disappearance and murder of alleged suspects and individuals of Somali origin. Corruption and impunity are a widespread problem within the Kenyan authorities.

Other serious human rights crimes include abuse of refugees in refugee camps by police and security forces and violence against and discrimination against women and children. Homosexuality is criminalized and imprisoned. Despite prohibition by law, female circumcision is widely practiced.