According to Countryaah.com, with capital city of Budapest, Hungary is a country located in Eastern Europe with total population of 9,660,362. 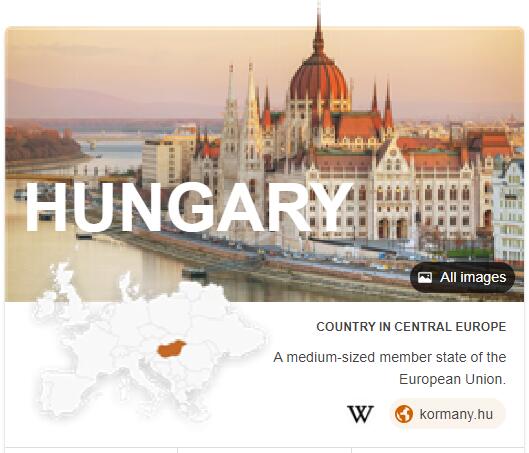 Hungary formally transitioned from being a Socialist People’s Republic to becoming a parliamentary democracy on October 23, 1989, by allowing the Communist Party to abandon its power monopoly and free party formation. A new constitution was adopted in 2011 and came into force in 2012. This replaced the revised constitution of 1949 since 1989.

The new constitution has been subjected to harsh criticism, both in Hungary and internationally, partly because it was considered to weaken the democratic mechanisms in the country through, among other things, a reduction in the sharing of power and the politicization of many offices, partly for its strong social conservative elements and its weak protection for minority groups.. The new constitution also included new electoral laws, which among other things reduced the number of members of parliament, increased the proportion of directly elected members and the electoral division changed.

The legislative power resides with a single-chamber parliament (országgyűlés) with 199 members, where 106 are elected by majority in one-person constituencies and the rest in proportional elections from regional and national party lists. To participate in the distribution of the mandate, a political party must receive at least 5 percent of the vote. All mandates are set for four years in general, direct elections, the latest in April 2014. The executive power lies with the government. The president is elected by Parliament for five years but has limited power and a mainly ceremonial role. In May 2012, former President and European Parliamentarian János Áder was elected President. Áder belongs to the government party Fidesz.

Prior to EU membership in 2004, Hungary was divided into seven regions. See ABBREVIATIONFINDER for how HU can stand for Hungary. Locally, Hungary is divided into 19 counties (megyék), in turn divided into municipalities, as well as the capital Budapest. Local elections are held in the autumn every four years, six months after the parliamentary elections. Since 1989, local self-determination has been strengthened.

Already in 1987–89, the democratic opposition formed into separate political parties with clear ideological differences. The first free elections in 1990 were won by the Conservative Hungarian Democratic Forum (MDF) which formed government together with the Smallholder Party (FKgP) and the Christian Democrats (KDNP). The Liberal Peace Democrats (SzDSz), with roots in the dissident movement of the 1970s and 1980s, became the largest opposition party while the former Socialist Party (MSzP) communists won only a tenth of the vote. The first years of the 1990s were marked by political stability, which consolidated the image of Hungary as an example of a successful democratization.

However, the transition to market economy was demanding, and in the 1994 elections, the government parties, which advocated a slower pace of economic reform, stepped back sharply. The major winner was the Socialist Party, which won its own majority, but nevertheless chose to form a coalition government together with the Peace Democrats, which again became the second largest party. In 1995, the Socialist-led government launched a very comprehensive economic savings package, including increased taxes and major cuts in the public sector.

In the 1998 elections, the ruling parties were again punished by dissatisfied voters and the largest party now became the Young Democrats (Fidesz MPP). Fidesz was originally a left-liberal grassroots movement that has sat in Parliament since 1990 but now made a clear turn in the nationalist and conservative direction. Fidesz party leader Viktor Orbán formed a majority government together with MDF and FKgP.

Orbán’s government pursued a nationalist policy and passed legislation that gave extensive rights to ethnic Hungarians in neighboring countries. Orbán also pushed through reforms that constitutionally strengthened the prime minister’s power. Government policy contributed to increased polarization of the political climate and the division of the party system into two blocks was cemented.

In 2002, the Socialist Party and the Peace Democrats returned to power after a very hot electoral movement and a record high turnout (just over 73 percent). Four years later, this government as the only one so far in Hungary succeeded in being re-elected. A short time after the 2006 election, a tape recording was published in which Socialist Prime Minister Ferenc Gyurcsany, in front of his own party mates, claimed that the government was lying in the electoral movement to be re-elected. The unveiling led to riots and the Socialist Party lost heavily in voter opinion.

Contradictions within the government coalition led the Peace Democrats to jump off in 2008, and in the spring of 2009, in the wake of the global financial crisis that hit Hungary hard, the Socialist government, after a declaration of confidence in Parliament, was forced to leave room for a party-wide expert government. The head of government became the partyless economist Gordon Bajnai.

The 2010 elections led to major changes in party politics. Fidesz won a superior victory with 53 percent of the vote and 2/3 of the parliamentary mandate, and could thus form a majority government on his own. The Socialist Party lost more than half of the electoral support while both the Peace Democrats and the MDF, the two parties that dominated Hungarian politics during the first half of the 1990s, resigned from Parliament.

Instead, two new parties came in, the Liberal and Green Party Politics Can Be Different (LMP) as well as the populist and extremist nationalist Jobbik (‘The Movement for a Better Hungary’), which with 17 percent of the vote became the third largest party. Jobbik, which also has a paramilitary branch (Hungarian Guard), is openly anti-Semitic and hostile to Roma.

The 2014 election meant a certain decline for Fidesz in terms of voter support. The party reversed 8 percentage points and received 45 percent of the vote nationally. Thanks to the new electoral system with an increased number of directly elected members, the party could still occupy 2/3 of the parliamentary mandate.

Fidesz’s electoral success was repeated, in part thanks to the changed electoral system, in the 2018 parliamentary elections when the ruling party received about 49 percent of the vote. Viktor Orbán’s party can thus continue to occupy 2/3 of the parliamentary mandate, a necessity for enforcing constitutional changes. Before the election, Orbán had run a nationalist-dominated electoral movement characterized by anti-Semitism, migration criticism and hostility.

Jobbik’s tactics, to move more towards the political middle ground before the electoral movement, proved to be a mistake. While Jobbik became the second largest party with just under 20 percent of the vote, the result was far from enough to challenge Fidesz about government power, with Jobbik’s party leader Gábor Vona (born 1978) resigning.

The power of the Hungarian government was expanded in the spring of 2020. This was after a number of legislative amendments were passed in Parliament which gave the Government the opportunity to enforce new laws without Parliament’s approval. The expanded powers were voted on during the ongoing covid-19 pandemic. They were criticized in several places as they lacked time limits and allowed long prison sentences for media critically reporting on the government’s handling of the pandemic.

On June 16, 1991, Hungary regained full sovereignty when the last Soviet troops left the country. Hungary quickly focused on being included in the security policy and economic structures of the West, ie. NATO and the EU. In 1997, Hungary received the invitation to join NATO as well as the clear sign to begin negotiating membership in the EU.

Following a referendum, Hungary became a NATO member in March 1999. As a new member, Hungary played a rather passive role in the Alliance’s war actions against neighboring Serbia that spring. Opinion in the country was fragmented and the issue posed a difficult dilemma for the Hungarian government, as NATO bombs also hit the Serbian province of Vojvodina with a large Hungarian population.

In 2003, Hungary, along with nine other former communist countries, took a stand for the US war in Iraq and Hungary also decided to contribute troops. On May 1, 2004, Hungary became a member of the EU following a referendum with low turnout but a large majority for membership. Hungary’s relations with neighboring countries Slovakia and Romania have at times been sensitive, mainly due to the situation of the Hungarian minorities in these countries. Relations improved since agreements were concluded with both countries in 1995 and 1996.

The fall of the Communist regime has led to major changes in the country’s legal life, first and foremost with a view to adapting the right to the needs of the market economy. The most important source of law consists of written laws, among other things. a civil law and a civil process law. The judicial organization consists of local small court courts, county courts which, in the first instance, determine more important cases and act as an appellate body in relation to the local courts, and a supreme court. Hungary also has some special courts and a constitutional court.

Since 2004, legal developments have been greatly influenced by the country’s membership of the EU. The death penalty was abolished in 1990; the last execution took place in 1988.

In the first years after the fall of communism, Hungary experienced dramatic political and economic changes. The number of people who lived below the minimum existed initially doubled but later stabilized during the early 1990s, but for many people, poverty came to endure.

Unemployment and the number of poor people rose in connection with the economic crisis in Europe in 2008, while funding for health care and education decreased. The majority of the permanently poor and unemployed have been Roma for decades.

The Romans are discriminated against and exposed at all levels of society. Harassment, unprovoked violence and outright murder of the Roma have occurred in the 2000s. Healthy Roma children are often placed in classes for the mentally handicapped. Roman girls and women are particularly vulnerable when they are subjected to double discrimination, partly on the basis of ethnicity and partly on the basis of gender. Trafficking in women for sexual purposes is extensive and here too, Roma women are over-represented, both within and outside the country’s borders. The country’s third largest party, the far-right Jobbik, has profiled itself in politics with a clear anti-Roman and anti-Semitic rhetoric.

In the new constitution that was adopted in 2012, several new laws were introduced that restrict personal freedom. Examples of the new conservative and religiously motivated laws are the definition of marriage as a union between a man and a woman as well as the right of fetuses to protection from the moment of conception. Parliament also later passed a law that allows municipalities to criminalize homelessness with penalties such as fines, community service and even prison.

In the summer of 2015, Hungary was at the center of the refugee crisis that resulted from hundreds of thousands of refugees from Syria and Afghanistan, among others, applying to Europe via a route where a large proportion of them passed through Hungary. Viktor Orban’s government adopted new asylum rules in order to increase the possibility of rejecting refugees into so-called safe countries. A barrier in the form of a high fence was also erected against the border with Croatia and Serbia in order to prevent refugees from entering the country. Police and military were given extended powers of violence to prevent illegal border crossings. Both the EU and the UN voiced strong criticism of Hungary for reducing the opportunities for protection in the country.

In the beginning of the 2010s, Hungary adopted new media laws that restrict freedom of expression in several areas. As a consequence of this, Hungary fell several positions on Reporter Without Borders Press Freedom Index. In 2015, the country was in place 64 out of 180, in 2006 it was in place 10.

1 From 1290, the Hungarian crown was disputed by several pretenders, and it was not until the 1320s that the country was again united under a ruler.
2 After the death of Louis II, the crown was disputed between the Habsburg house on the west and the Zápolya house on the east. The feud was settled in 1541 through Turkish intervention, after which the Hungarian royal title remained linked to Austria’s Habsburg rulers.
3 The nominal kings lived in exile.

Leader of the Communist Party