According to Countryaah.com, with capital city of Bissau, Guinea-Bissau is a country located in Western Africa with total population of 1,968,012. 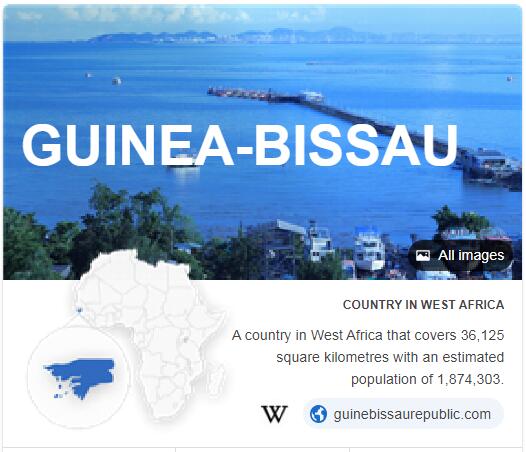 Guinea-Bissau became independent from Portugal in 1974. The country has since experienced numerous coups, coup attempts and long periods of unresolved political conflicts. See ABBREVIATIONFINDER for how PU can stand for Guinea-Bissau.

The constitution was adopted in 1984 and has subsequently been revised several times. In the late 1980s, a democratization process began, which in 1991 led to a number of constitutional changes, including the introduction of multi-party systems and market economy. Similarly, the link between the armed forces was abolished and until its state-bearing Partido Africano da Independência da Guiné e Cabo Verde (PAIGC). Through a constitutional amendment in 1996, Guinea-Bissau applied for membership in the West African Franc zone, where the country entered 1997.

The president is elected in general elections for five years; In 1999, the president’s term in office was limited to a maximum of two terms. The government is led by the prime minister appointed by the president.

The legislative power is held by a directly elected parliament with 102 members with a term of office of four years.

In the 1994 presidential election, the first since democracy was introduced, João Bernardo Vieira, who has been head of state since he took power in a coup d’etat in 1980, prevailed. He was deposed by the military in 1999 and fled. In the presidential election the following year, Kumba Ialá (1952–2014), representing the Partido para a Renovação Social (PRS), defeated PAIGC candidate Malam Bacai Sanhá (1947–2012).

PAIGC, which was a leader in the fight against the Portuguese colonial power and which since independence has been the dominant political force in the country, still has great influence. The party retained power in the first free elections in 1994, lost it to the PRS in 1999 but returned to office in 2004 after five years marked by great political unrest.

In 2005, Vieira, who was running as an independent candidate, returned to the presidential post after defeating Sanhá in the second round with 52 percent of the vote. Vieira lacked stable support in the National Assembly and the government crises replaced each other in the coming years. In the 2008 parliamentary elections, PAIGC again won.

Vieira was murdered in March 2009 by soldiers and succeeded by Sanhá who received 63 percent of the votes in the second round of the presidential elections in July of that year. Sanhá passed away in January 2012 and was temporarily replaced by Parliament’s President Raimundo Pereira (born 1956).

Presidential elections were announced until March of the same year. PAIGC’s Carlos Gomes Júnior (born 1949) resigned as prime minister in order to run for office, and in the first round of elections he received 49 percent of the vote. Former President Kumba Ialá, who finished second with 23 percent of the vote, demanded that the election be annulled and refused to take part in a second round of elections. However, the election was largely approved by international observers, and the country’s election commission rejected Ialá’s demands.

In April 2009, the military took power in a coup and the second round of elections never came to fruition. A national transitional council was formed, without the participation of PAIGC. The interim president was appointed PAIGC’s third president, Manuel Serifo Nhamadjo (1958-2020). He accepted the assignment only after the junta agreed to the West African cooperation organization ECOWAS’s demand that elections be held within twelve months and that a regional military force be sent to the country.

However, the elections were postponed several times and only held in April 2014. In the parliamentary elections, PAIGC, which received 55 seats, won against 41 for the PRS. The battle for the presidential post was primarily between PAIGC’s candidate, former Finance Minister José Mario Vaz, and independent candidate Nuno Gomes Nabiam; neither Nhamadjo nor Ialá lined up. After a first round of voting where Vaz received 41 percent of the vote and Nabiam 25 percent held a second round of elections in May, in which Vaz received 62 percent of the vote.

In 2015, a power struggle broke out, both within PAIGC and partly between forces within the party and President Vaz, who basically crippled politics in the country. In 2016, the president dismissed Prime Minister Carlos Correia (born 1933), but he and PAIGC have not been able to agree on any successor.

To break the deadlock, parliamentary elections were announced for the fall of 2018 and a collaborative government with ministers from both PAIGC and PRS was formed. The elections were first held in March 2019 and resulted in yet another victory for PAIGC, which was forced to seek support from smaller parties to gain a majority in the National Assembly. However, Vaz refused to approve PAIGC party leader Domingos Simões Pereira (born 1963) as head of government and reappointed Aristides Gomes (born 1954) to the post.

When Guinea-Bissau became independent in 1973, the country continued to apply Portuguese law in the absence of alternatives. The death penalty was abolished in 1993; the last known execution took place in 1986.