According to Countryaah.com, with capital city of Guatemala City, Guatemala is a country located in North America with total population of 17,915,579. 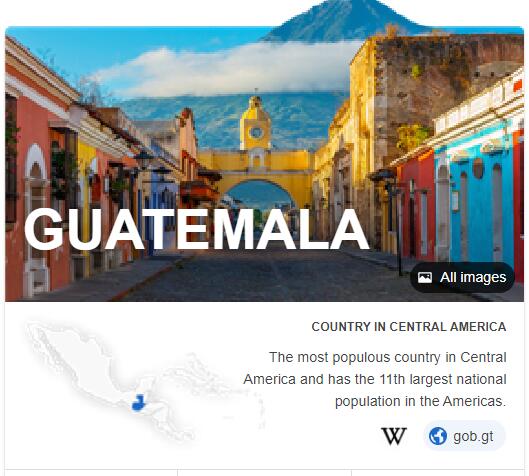 Guatemala is governed by a president who is both head of state and government, as well as commander-in-chief and who himself appoints his ministers. The term of office is four years and the president cannot be re-elected. The congress consists of a chamber with 158 members, who are also elected for four years. A member may be re-elected once after a termination of office.

The country of Guatemala is divided into 22 provinces governed by a government appointed by the government. The more than 330 municipalities are governed by elected mayors. The right to vote includes everyone who has reached the age of 18. See ABBREVIATIONFINDER for how GT can stand for Guatemala.

After 36 years of civil war that left 200,000 dead and over 1 million refugees, a peace agreement was signed in 1996 between President Alvaro Arzú (1946–2018) and the URNG guerrilla. The agreement was aimed at strengthening democracy and guaranteeing respect for human rights.

Despite the existence of the peace agreement, the contradictions in society did not decrease. The subsequent term of office meant further corruption and persecution of lawyers who tried to drive processes against the military, critical journalists and human rights activists.

Only during the presidency of Óscar Berger’s (2004–08) presidency did a series of charges of corruption and abuse of power be opened against former government members and military.

The 2007 election campaign became very violent and about 50 candidates and election workers were murdered. A center – left alliance, the Unión Nacional de la Esperanza (UNE), became the largest party in Congress and its candidate Álvaro Colom (born 1951) was elected president.

The alliance was a collaboration between the former URNG guerrillas and other political parties. The election was a milestone in Guatemala’s political history when it was the first time since the 1954 military coup that a leftist group gained power.

Former General Otto Pérez Molina (born 1950) from the right-wing party Partido Patriota (PP) took office as president in 2012. Molina made the choice to stop the growing crime in the country, mainly by training more police and having more soldiers out in society.

Molina’s first term as president became troubled, with widespread protests in several parts of Guatemala. At a demonstration in late 2012, the military killed six people. In 2013, the government introduced a state of emergency in a region following new violent clashes. After a comprehensive corruption deal was unveiled, involving ministers, among other things, protests around the country grew, demanding the resignation of the government and the president. When a court issued a warrant for Molina, he resigned himself.

The subsequent 2015 election was won by comedian Jimmy Morales who won a lot of support by presenting himself as a candidate based on the traditional establishment. Under Morale’s leadership, Guatemala, like the United States, moved its embassy from Tel Aviv to Jerusalem. The decision was highly controversial as a united international community, including the United States, previously held the position that Jerusalem’s status should be decided in peace talks between Israel and Palestine. Foreign embassies and consulates in Israel have therefore been located in Tel Aviv.

Morales was suspected of being involved in widespread corruption, with a UN-led commission seeking to lift the president’s prosecutorial immunity. However, this failed when Morales did his utmost to make the Commission’s investigation more difficult and no verdict has fallen.

In the 2019 presidential election, Vamo’s candidate Alejandro Giammattei won. He won the second round of the election against Sandra Torres (born 1955) from UNE with just under 60 percent of the vote. Giammattei took office in January 2020.

Guatemala has had a long-standing conflict with neighboring Belize as its country’s leader ever since Guatemala declared its independence from Spain in 1821. Parts of what is now Belize were then occupied by Britain and the area was therefore called British Honduras and in turn became independent from Britain only in 1981. Guatemala refused to accept the neighboring country as a sovereign state, but after negotiations, Guatemala in 1991 recognized the nation of Belize and released the requirement for the area to be incorporated into Guatemala.

However, the conflict has continued and Guatemala requires border adjustments. In 2013, the countries agreed to let the international court in The Hague decide the dispute.

Guatemala’s law is, for the most part, codified, mainly in the Civil Code, the Commerce Act, the Civil Procedure Act, the Criminal Code and the Criminal Procedure Act. The judicial process lies in the hands of small-scale judges (peace judges), general courts, an appellate court and a supreme court. There is also an administrative court, whose rulings can, however, be appealed to the Supreme Court, as well as a number of other judicial bodies, e.g. tax courts, military courts and social insurance courts. The death penalty can be punished for some serious crimes.

The people of Guatemala are severely affected by poverty and political instability as a result of the long and violent civil war the country suffered for 36 years (see History).

Despite the serious human rights violations committed by the military during the war, it continued to play a key role in domestic politics during the 2000s. A state of emergency has been declared on a number of occasions.

Violence, corruption and impunity are common and organized crime is widespread. Judicial officials, human rights defenders and journalists are threatened, attacked and murdered.

Freedom of speech and media is prescribed in the country’s constitution, but self-censorship is common, mainly on sensitive topics such as corruption, economic crime or the drug-related organized crime. In Reporters Without Borders Press Freedom Index for 2015, Guatemala is ranked 124 out of 180 countries surveyed.

The position of women is weak and the widespread violence against women rarely leads to prosecution. Patriarchal attitudes and stereotypical perceptions of women’s role permeate society. According to Human Rights Watch, rape and sexual abuse of women increased by 34 percent in 2008-11 while nine out of ten perpetrators went free. Sexual harassment is not prohibited by Guatemalan law and particularly vulnerable are indigenous women and women who work as maids or in the agricultural sector. Although gender equality is enshrined in the constitution, women are significantly discriminated against both in the labor market and financially. Abortion is not allowed except when the mother’s life is at stake.

The minimum age for professional work is 14 years, but reports indicate that just over 20 percent of children between the ages of 5 and 14 are forced into child labor. Children are also exploited in sex tourism, child pornography and organized crime. The country’s street children are particularly vulnerable to ruthless treatment and human trafficking. UNICEF estimates that two-thirds of children live in poverty and half of all children under five are chronically malnourished.

Guatemala’s many indigenous peoples (see Population and Ethnography) are particularly vulnerable to racism and discrimination. Access to community services, health care, clean water and education is made more difficult for these groups, which make up half of the country’s total population. A large part of the country’s internal conflicts relate to the indigenous peoples’ limited opportunities to own land, which in escalations escalated into outright murder.

Hate crimes and structural discrimination against LGBTQ people occur and the worst affected are transgender people. In 2012, twelve murders related to hate crimes were reported, but the number of blacks is expected to be high.

For people with disabilities, access to community services, education and work is limited.