According to Countryaah.com, with capital city of Libreville, Gabon is a country located in Central Africa with total population of 2,225,745. 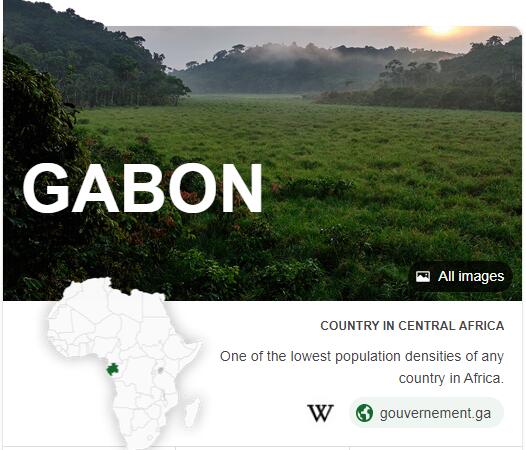 In practice, Gabon acted as a one-party state from independence from France in 1960 until 1990, when multi-party systems were introduced. See ABBREVIATIONFINDER for how GA can stand for Gabon. However, the country has been ruled by the same family since 1967, first with Omar Bongo as president and since 2009 by his son, Ali Bongo Ondimba.

After internal turmoil in 1991, a new constitution was adopted, which has since been amended several times. The changes were mainly aimed at extending Omar Bongo’s power holdings. Originally, the term of office of the President was five years, and he could be re-elected only once. In 1997, the term of office was extended to seven years, and from 2003 the president can be re-elected for an unlimited number of times. Following a constitutional amendment in 2010, the president is also allowed to extend his term of office in a “crisis situation”. A new addition further strengthened the president’s power.

The president is the head of state and commander-in-chief, appoints the prime minister, holds the executive power and can, after consultation with ministers and leaders of the national assembly, announce new elections.

The legislative power lies with Parliament, which has two chambers. The National Assembly’s 143 members are elected by universal suffrage for five years. A Senate with 102 members oversees the balance of power between the President and the National Assembly. The senators, with a term of six years, are elected by the members of the municipal and provincial assemblies.

When the country’s first president, Leon M’ba, passed away in 1967, he was succeeded by Vice President Albert-Bernard Bongo, who later changed his name to Omar Bongo. The country had hitherto been in practice a one-party state, but in 1968, Parti démocratique gabonais (PDG) was explicitly the only allowed party. It was not until 1990 that multi-party systems were introduced.

In the presidential elections that took place in 1993, 1998 and 2005, Omar Bongo won by a good margin, mainly due to the split of the opposition. For the same reason, PDG gained a satisfactory majority in all parliamentary elections. The general elections have usually been bordered by violent unrest and protests by the opposition to alleged cheating. Parts of the opposition have periodically tried to gather in alliances to counter PDG’s dominance, but the attempts have not been successful. PDG has successfully undermined the opposition’s split by offering occasional regime critics seats in the government. The only party that has been able to offer PDG relatively tough opposition in the political debate and in general elections has been the Rassemblement national des bucherons (RNB), which in 1999 changed its name to Rassemblement pour le Gabon (RPG).

Omar Bongo passed away in 2009 after 42 years in the presidential post. Ahead of the presidential election later that year, PDG nominated Bongo’s son, then Defense Minister Ali Bongo Ondimba, as his presidential candidate. With 42 percent of the votes, he was eventually declared a winner, after which violent riots broke out in several places in the country. The 2011 parliamentary elections were also disputed. Among others, André Mba Obame (1957–2015), second in the 2009 presidential election, called for a boycott. The turnout was only 34 percent and PDG received 107 out of 120 seats.

The run-up to the 2016 presidential election became uneasy since Mba Obame died in Cameroon, according to his supporters as a result of poisoning. Bongo Ondimba ran for re-election and was challenged by Jean Ping (born 1942), former Foreign Minister and chairman of both the UN General Assembly and the African Union Commission. According to the official result, Bongo Ondimba received 49.8 percent of the vote against 48.2 for Ping, a margin corresponding to fewer than 6,000 votes. The aftermath became violent with several dead and hundreds arrested.

In the parliamentary elections held in October 2018, the ruling party PDG again gained an overwhelming majority.

When Gabon became independent in 1960, it retained extensive legislation introduced by the French, including a civil code and a trade code, but also traditional domestic custom within, among other things. family law. Important codifications were introduced in the 1960s, including a Penal Code (1961) and a Penal Code (1963). The death penalty still remains in the legislation but is de facto abolished in 1981.