Thomas More (1478 – 1535)
The humanistic author and statesman was initially a lawyer and negotiator for the government; in 1504 he became a member of parliament. From 1510 he was Undersheriff of London, in 1516 he wrote the book “Utopia”. Henry VIII called him to court and More became a member of the secret council. He was knighted in 1521, was Speaker of Parliament from 1523 and Lord Chancellor six years later, which comes close to today’s Prime Minister. In 1534 he refused to take the Supreme Oath before the Privy Council and was sentenced to death and executed in 1535.

Lord Horatio Nelson (1758-1806) was an English naval officer of the highest rank who fell during the victorious battle of Cape Trafalgar against Spain and France. The huge Nelson’s Column in Trafalgar Square in London was erected in his honor.

Benjamin Disraeli (1804 – 1881)
The two-time British Prime Minister and writer became head of state in 1868 after the resignation of his predecessor Lord Derby, but lost in the elections that followed. In 1874 his conservative party was able to regain a majority and Queen Victoria ensured that he was once again prime minister. In 1876 she raised him to the nobility. His literary works include: The Life and Reign of Charles I, Vivian Gray, Contarini Fleming, Alroy and Henrietta Temple; all deal with political and social issues of the time.

William Booth (1829 – 1912)
The founder of the Salvation Army, known as the “General of God”, set up a tented mission in the London slums. His “army” fought against the grievances of society and took care of the outcasts: criminals as well as prostitutes, beggars and alcoholics. In addition, as a preacher he converted many people to the Christian faith. With the Salvation Army he created a worldwide organization, which at his death was already represented in 58 countries.

Eliszabeth II (born 1926)
The Queen of the United Kingdom of Great Britain and Northern Ireland and the Commonwealth, Elizabeth Alexandra Mary Windsor, was born in Mayfair, London. The daughter of Prince Albert, Duke of York and later King George VI. and the Duchess of York, Elizabeth Bowes-Lyon, served as the first female member of the royal family to serve in the military. As early as 1936, she had been made the likely heir to the throne. In 1947 she married Philip Mountbatten, the Duke of Edinburgh, after he had renounced the throne of Greece. The couple lived from then on in Clarence House in London, and in 1948 their first son, Prince Charles of Edinburgh was born. As early as 1951, Elizabeth represented the sick king on many occasions and traveled for him to receptions and state visits. Crowned Queen at Westminster Abbey on June 6, 1953. The royal family now moved to Buckingham Palace; However, Elizabeth continued to travel extensively – she is the most widely traveled head of state in the country’s history. Elizabeth is widely considered to be morally conservative and follows her religious duties and the royal oath very strictly.

John Major (born 1943)
The native of London was her successor in the Conservative Party after Margaret Thatcher’s resignation and Prime Minister of the United Kingdom from 1990 to 1997. London experienced an economic recession during his first term in office, Major led a popular election campaign and was able to secure a slim majority for the Conservatives. After the close elections, there were fierce conflicts over direction within the party, so that the government lost more and more of its ability to act. Major orders a vote of no confidence and won, even if he suffered the loss of his authority. In 1995 Major resigned and was re-elected because he feared he would be voted out. After several by-elections, however, he lost an absolute majority in 1996 and was henceforth dependent on the Northern Irish Unionists.

Tony Blair (born 1953)
A native of Scots, Tony Blair is the most popular Prime Minister Britain has ever had. In office since May 1, 1997, he has been the Labor Prime Minister’s longest uninterrupted ruling. Shortly after graduating, he joined the Labor Party and entered parliament in the 1983 general election, despite the fact that his party suffered a devastating defeat. From then on, Blair experienced a steep rise and gained notoriety after the stock market crash of 1987 when he presented himself as the modernizer of the London Stock Exchange. Blair had been party chairman since 1994 and from then on reformed the party by first replacing the party statutes of 1918, social reforms and an opening of the country to the EU were important points in his policy, which he himself called New Labor, what should delimit his Christian-democratic guideline from socialist ideas. His party won the general election in 1997 and Tony Blair became the youngest British Prime Minister since 1812 at the age of 43. During his first term in office from 1997 to 2001, he gave the Bank of England a free hand in setting policy rates, signed the Good Friday Agreement, which defused the Northern Ireland conflict, and gave a speech in the Irish Parliament. He also passed decisive constitutional reforms; a human rights catalog was introduced, a new structure created for the greater London area and a “Freedom of Information” act passed. Blair also played a crucial role in the 1999 Kosovo crisis. In the 2001 election campaign, Blair advocated an improvement in public services and health care. The Labor Party won by a large margin and Blair ruled for a full second term. After the terrorist attacks of September 11th, Blair consistently sided with the United States and also supported the American president in the attack on Iraq. After the fall of Saddam Hussein, Blair came under heavy domestic political pressure when the existence of weapons of mass destruction in Iraq was not confirmed. There was further controversy in 2003 about the death of weapons expert David Kelly, the tuition fees and the ban on fox hunting. In 2005 Blair won the general election again with Labor, despite a significant loss of votes and some internal and non-party problems.

Margaret Thatcher (19252013)
Margaret Hilda Thatcher, Baroness of Kesteven was the first female Prime Minister of the United Kingdom of Great Britain and Northern Ireland from 1979 to 1990. After studying chemistry and giving birth to twins, she was elected to the House of Commons as a candidate for the Conservative Party in 1959 and became Minister of Education and Science in Edward Heath’s cabinet in 1970. In 1979 she won the general election; and remained Prime Minister until she resigned in 1990. She reformed the country with iron severity, which earned her the name “the iron lady”.

Ken Livingstone (born 1945)
The Lord Mayor of London is a member of the Labor Party and is also known as “Red Ken” because of his leftist politics. He initially worked in cancer research and only went into London politics from 1969, where he was elected to the local government of the Lambeth district. In 1981 he became chairman of the Greater London Council. Its policy is controversial. Tony Blair wanted to prevent his election as mayor of London and described him as a “socialist relic”. His party expelled him in 2000, but he still won the elections that year by a clear margin.

Diana Frances Spencer; Lady Di (1961-1997)
The daughter of Lord and Lady Althorp was working as a kindergarten teacher in London when she met the heir to the throne, Prince Charles, in 1977. In 1979 a romance developed between the two, and in 1980 the press began to persecute the young woman and did not leave her side until her early accidental death. The wedding between Charles and Diana in 1981 was the largest ever celebrated. In 1982 and 1984 their sons William and Henry were born. Charles broke up in the early 1990s and Diana struggled with eating disorders and depression. On August 30, 1997, a tragic car accident occurred in Paris when Diana’s car crashed into a tunnel pillar while fleeing from paparazzi. Diana and her lover Dodi Fayed were killed in the accident. The funeral service took place on 6. September at Westminster Abbey. On June 6, 2004, a Diana memorial fountain was inaugurated by Queen Elizabeth II in London’s Hyde Park in her honor.
As a symbol of a modern monarchy, she became a legend during her lifetime. Many people saw in her a woman from the people, “one of the people”, she was a role model due to her commitment to charitable causes and is considered the most photographed woman in the world. People loved her for her insecurity, which was felt again and again despite her sophistication and self-confidence.

Richard III is known to most from the Shakespeare play of the same name. He was the last English king to die on the battlefield – he was slain by the noble Rhys ap Thomas from Wales on August 22, 1485 at Market Bosworth in the battle against Henry VII Tudor (1457-1509).

His remains were considered lost for centuries. But in 2012, his bones were found under a parking lot in Leicester. The city of Leicester, with around 330,000 residents, is the administrative seat of the county of Leicestershire and is located in the middle of the country. With a great deal of effort and royal ceremony, he found his final resting place on March 26, 2015 in Leicester Cathedral. 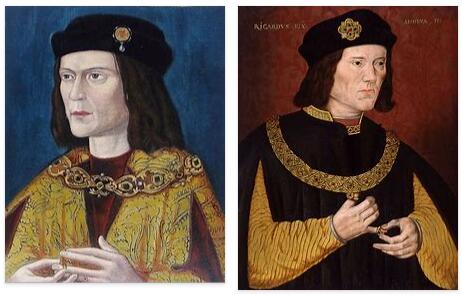