The Czech Republic is one of the two sovereign states (the other is Slovakia), born on 1 January 1993 from the peaceful division between the two parts of Czechoslovakia. The residents represent the advanced point towards the west of the Slavs precisely called Western, settled on the borders of the Germanic world, whose cultural influence they have felt throughout their history. It is essentially formed by the Czechs (in the Germanic and Latin languages ​​known as Bohemians), which constitute 81 %, and by the Moravians (13 %), closely related to the former and in solidarity with them and speaking the same language, as well as by a 3% of Slovaks and some small group of Poles, Silesians (culturally not very different from Moravians), Germans (residue of the very numerous expelled, especially from the Sudetenland region, at the end of the Second World War) and others. In the religious field, it should be noted that the large Catholic majority is joined by a traditional and active small Protestant minority (Hussites and ‘Bohemian brothers’).

Czech agriculture, whose privatization has advanced but leaves ample room for cooperative forms even if of a new type, boasts specialized productions in sugar beet, wheat, barley (with the complementary cultivation of hops in the valley of the Ohře), in potatoes and also, on a limited scale, in grapevines (Moravia, Mělnik plain). The woods dominate the mountain areas and collectively cover a third of the country’s surface. The prevalent breeding is the pig one.

However, at the end of the millennium, the rural economy absorbed only a little over one twentieth of the active population. The Czech Republic is therefore above all an industrial country, the most developed and the most similar to the West – in this field privatization, with its set of foreign investments, proceeded swiftly and was practically completed at the end of the nineties – among those Eastern Europe, with strong production concentrations, especially in Northern Bohemia. After the crisis of transition, a notable recovery in production made itself felt in the mid-nineties, even if – at the end of the 20th century° – there was no lack of disappointments in achieving the pre-established economic goals, disappointments that opened the way to controversy and doubts about the actual consistency of what was initially considered the ‘miracle’ of the post-communist transformation.

Traditional carboniferous country of a good European level, Czech Republic obtains good quantities of anthracite, and even more so of lignite, from the basins of Ostrava, in the Czech Silesia contiguous to the Polish one, and of northern Bohemia; in these areas a robust iron and steel factory was established and several lignite-fired thermal power stations were built. Energy is also obtained from imported Russian oil and from two nuclear power plants (with some safety problems and some popular protests), which also use locally extracted uranium. Finally, Czech Republic obtains small quantities of metal ores from the subsoil; but its industrial profile is essentially that of a country that imports raw materials to export manufactured goods: from cars (Škoda, now in the Volkswagen group) to traditional Bohemian crystal and porcelain, from musical instruments to fabrics from the northern foothills (Erzgebirge and Sudetes) and to footwear. The forestry economy, for its part, feeds paper mills and furniture factories.

Much of the commercial relations of the Czech Republic take place, as well as with the Slovak ‘separate sister’ (a customs union agreement was signed between the two states from the beginning), with the rich and powerful German neighbor. Tourism can count on the natural beauties of the country and on the fascination exercised by the works of art and the urban structure of the capital, which, moreover, still has to solve some problems of organization and safety.

According to Countryaah.com, with capital city of Prague, Czech Republic is a country located in Eastern Europe with total population of 10,708,992. 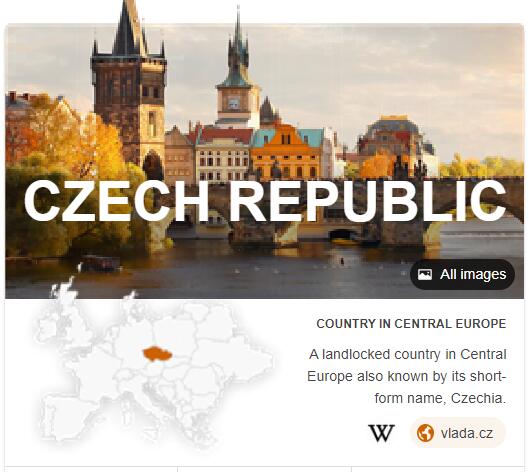 Following the 1993 constitution, the Czech Republic is a unified state and a democratic-parliamentary republic. The head of state, the president, is primarily a constitutional head of state, but the country’s first president, Václav Havel, played an important political role, not least by virtue of its moral leadership. The president appoints the prime minister, government and other key officials, as well as representing the state overseas and formally being military commander in chief. Prior to the 2013 presidential election, the president was elected by the two chambers of the legislative assembly for five years with the possibility of one re-election. With the 2013 election, the president is elected in direct elections. To be eligible for election, a candidate must either have the support of 20 MPs or senators or the signature of 50,000 eligible voters. If a candidate does not get a majority, a second ballot is held.

The executive is in fact with the prime minister and the government. The government is based on, and is responsible for, the lower chamber of the Legislative Assembly, the Chamber of Deputies (Poslanecká Sněmovna). It has 200 members and is elected for four years; the second chamber, the senate, has 81 members and is elected for six years, so the third party is replaced every other year. Both chambers are elected in general elections.

Following the collapse of the communist regime in 1989 (the “velvet revolution”) and the dissolution of the federation with Slovakia from 1993, the Czech Republic has built a new state and a new political system. The party system has been under development, the most important being the Liberal Conservative ODS and the Social Democratic ČSSD. Other important parties are the Communist Party KSČM, the Christian Democrats KDU – ČSL and the Right Party TOP 09. Newer minor parties are SPOZ, Věci veřejné, ANO, Dawn for Direct Democracy and LIDEM.

Administratively, the Czech Republic is divided into 14 regions (kraj), among them the Prague metropolitan area. They are led by a people-elected council, with associated executive bodies. See ABBREVIATIONFINDER for how EZ can stand for Czech Republic.

The judiciary includes a Supreme Court, the Supreme Administrative Court, convicts, regional courts and district courts. It is also a constitutional court of its own.

Presidents of the Czech Republic

Prime Ministers of the Czech Republic