According to Countryaah.com, with capital city of Nicosia, Cyprus is a country located in Western Asia with total population of 1,207,370. 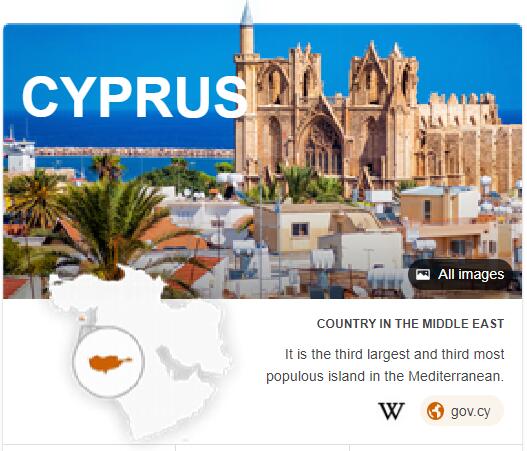 Following the 1960 Constitution, Cyprus is an independent, democratic, unified state and largely presidential republic. Since the Turkish invasion of 1974, however, the constitution has only been in force for the Greek-Cypriot, southern part of the island. The northern part, Northern Cyprus, was in 1983 it was proclaimed an independent state, but is recognized only by Turkey and considered by the rest of the world community as an occupied part of Cyprus. In 1985, Northern Cyprus was given a new constitution. Several attempts at reunification have failed.

The president, who is the head of state and, in effect, also the head of government, is elected in general elections for five years. The Vice President is supposed to belong to the Turkish minority under the Constitution, but this position has been vacant since 1974.

Legislative authority has been added to the House of Representatives. After the division of the island, it has 56 members, elected in the general election for five years. According to the Constitution, the Turkish People’s Group shall have 24 members of the House of Representatives. Also, the Northern Cypriot Republic, by its constitution, has elected an elected president and a government from a 50-member popular assembly.

Both the Greek and Turkish state have a multi-party system.

Administratively, Cyprus is divided into six districts, each governed by a government-appointed official. The districts cross the border between the two states. See ABBREVIATIONFINDER for how CY can stand for Cyprus.

The highest court is the supreme court, with ten members, appointed by the president. It is appellate court in both civil and criminal cases. Otherwise, there are prosecutors for serious criminal cases, and, as first instance courts, district courts. A Supreme Judicial Council appoints judges to the courts of the Supreme Court and otherwise has a supervisory function with the judiciary.

In the Turkish part of Cyprus there is a separate judicial system. There are separate Greek ecclesiastical and Turkish Islamic family courts.

The conflict between the Greek Cypriots and the Turkish Cypriots (Northern Cyprus) and their close relations with respective Greece and Turkey is also the main premise of Cyprus’s foreign policy.

Cyprus has a close relationship with Greece for cultural and political reasons, although it has at times been difficult due to Greek intervention in Cypriot politics – as in the 1974 coup d’état, when the right-wing, militant group EOKA B, fought for union (“Enosis”) with Greece, took power in Cyprus, supported by the Athens military junta. Cyprus also has a close relationship with the United Kingdom, both former colonial powers, a guarantor of the country’s independence and having retained two military bases on the island.

With the application for EU membership in 1990 and the membership from 2005, Cypriot foreign policy gained a wider field of impact. Following the dissolution of the Soviet Union, there were close relations with Russia, not least in the form of economic relations; a number of foreign companies – including many Russian – have established themselves on the island.

During the Lebanese civil war, many Lebanese took refuge in Cyprus.

In 2016, the first-time service in the Greek Cypriot National Guard was reduced from 24 months to 14 months, as part of a move towards a more professional army. Cyprus’s closest ally is Greece, and the country has defense policy ties with France and Israel.

The total number of sicknesses for Cyprus’s armed forces is 15,000 active personnel, with a reserve of 50,000 personnel (2018, IISS), all in the National Guard. In addition, there are about 750 semi-military police forces.

Greece and the United Kingdom have forces in Cyprus, with 950 and 2260 personnel respectively. The UN also has a presence through the UNFICYP peacekeeping operation, with an international staff of around 535 personnel.

In 2018, Turkey had a force of about 33,800 personnel stationed in the Turkish-occupied section.