According to Countryaah.com, with capital city of N’Djamena, Chad is a country located in Central Africa with total population of 16,425,875. 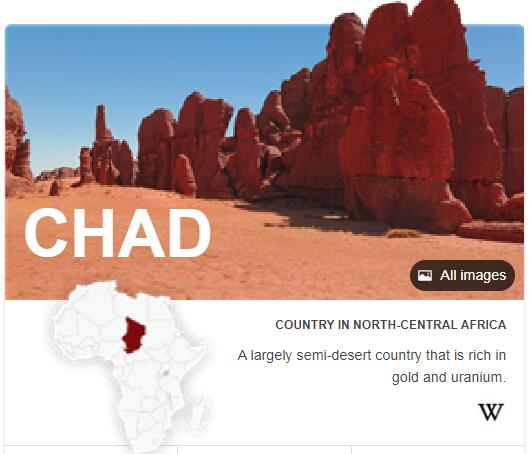 Chad is formally a democratic republic. In reality, the country is ruled by a dictatorial president and his close family. The president is the country’s head of state, appoints all ministers in the government and has great personal power. The 169 members of the National Assembly are elected by the people every four years, but have limited influence in political decisions.

The President is the country’s supreme leader and has very great power. Formally, the president is elected in democratic elections every five years. In the 1996 Constitution, the president could only be re-elected once. In 2005, Parliament amended this restriction so that the president could be re-elected an unlimited number of times. Idriss Déby was thus re-elected for a third term in 2006, for a fourth term in 2011 and for the fifth time in April 2016. In May 2018, a new constitution was passed. The new constitution, which established the Fourth Republic of Chad, allows only two re-election of the same president from its enactment. Thus, Idriss Déby Itno can be legally re-elected in the upcoming presidential elections in both 2021 and 2026.

The Constitution of 2018 took away the post of prime minister, thus giving the president even more power than before. In fact, the president nominates all the ministers himself, and he makes many and large replacements of ministers several times a year. In this way, he gains even more power since very few ministers retain their positions for several years. The president uses his constitutional right to issue decrees to appoint people in important positions within the state apparatus and in state corporations. In recent years, the president’s wife, Hinda Déby, has greatly influenced appointments in the state apparatus. She has placed many of her own extended family members in central state positions.

Since independence in 1960, Chad has been characterized by great turmoil, in part civil war. See ABBREVIATIONFINDER for how CD can stand for Chad. The turmoil has to some extent been rooted in contradictions between the Arab- Muslim north and central areas and the African, Christian and animist south. However, control of the country’s resources has been equally important for the unrest.

Various groups are fighting for presidential power. Sometimes the struggle is violent, as when several military-political groups almost managed to conduct a coup d’état in February 2008 and February 2019. Other times the power struggle is non-violent and is largely carried out by students, trade union leaders and opposition candidates, such as in 2015 and 2016. After 2017, the regime has managed to divide the civil opposition by offering positions or sums of money to important opponents and in this way winning their loyalty.

Administratively, Chad is divided into 23 provinces (counties), each of which is divided into several prefectures (large municipalities) and sub-prefectures (municipalities). All three of these administrative levels are controlled by government-approved officials. The President runs a large-scale replacement of his administrative staff so that a regional governor or prefect cannot expect to retain his position for long; often shorter than one year.

The judiciary includes a Supreme Court, a Court of Appeal and Magistrate and Criminal Courts. The Supreme Court has its own constitutional chamber. The legislation is based on both traditional and French examples. The courts are not considered independent; Corruption is very common in affecting a single settlement. In addition, there is a parallel, traditional judicial system in which village chiefs act as supreme judges.

Chad has conscription after selection. The total force figures for Chad’s armed forces are 30,350 active personnel (2018, IISS). In addition, 4,500 semi-military forces are arriving in a gendarmerie. In 2018, France had troops in Chad with a total of 1,500 personnel and four fighter aircraft (Operation Barkhane).

The army has a strength of about 25,000 active personnel. Material includes 60 tanks of a T-55, about 309 reconnaissance vehicles, 131 armored vehicles, 99 armored personnel carriers, 30 armored fighters and ten self-propelled artillery. In addition, the Army has light artillery, short-range anti-aircraft missiles and anti-aircraft artillery.

The Air Force has a force of 350 active personnel. Materials include one fighters of a MiG-29, ten attack aircraft of the type Su-25, ten transport aircraft, four trainers (three of which can also be used as light attack aircraft) and 15 helicopters, five combat helicopters of the type Mi-24.

Chad participated in 2018 in the UN operation in Mali (MINUSMA) with 1447 personnel and three observers.