According to Countryaah.com, with capital city of Bangui, Central African Republic is a country located in Central Africa with total population of 4,829,778. 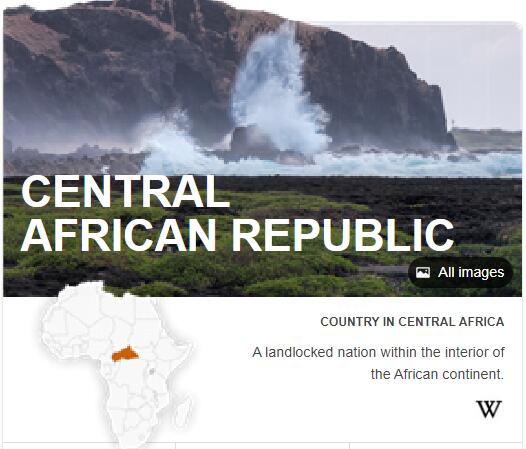 The Central African Republic has throughout its time as an independent state since 1960 characterized by instability and internal conflicts. The country has experienced five coups, a number of coup attempts and military revolts and is in its eighth constitution.

The country’s most recent constitution was approved in a referendum in December 2015. The executive power is held by the president, who is head of state, commander-in-chief and appoints the prime minister, and approves his proposal for government ministers. The president is elected in the general election for five years and can be re-elected. The country has had a female head of state: Catherine Samba-Panza, interim president 2014-16.

After several years of armed conflict, the Central African Republic in late 2015 and early 2016 took several steps towards a more orderly political government. See ABBREVIATIONFINDER for how CT can stand for Central African Republic. Under the leadership of Catherine Samba-Panza, interim president since 2014, a new constitution was drafted which was approved in a referendum in December 2015. This was a prerequisite for parliamentary and presidential elections to be held later that month.

In January 2016, the country’s constitutional court annulled the parliamentary election, citing irregularities in the election. Despite complaints from several of the candidates, the result was approved in the presidential election. In this, the independent candidate and former Prime Minister Faustin-Archange Touadéra won by 63 percent of the votes in the second round. New parliamentary elections were held in February and March 2016 with supplementary elections in May and June. 60 of the total 140 members were nominated as independent candidates. The largest party with 16 seats became the Union national pour la democratie et le progrès (UNDP). Party politics is characterized by several smaller parties, which are primarily aimed at one of the country’s more than 20 different ethnic groups.

The ethnic and religious contradictions escalated since the rebel movement Séléka in 2013 entered the capital Bangui and forced President François Bozizé to flee abroad. Former army chief Bozizé himself took power through a coup and was accused of electoral fraud after his victories in the 2005 and 2011 presidential elections.

Séléka’s leader, Michel Djotodia, proclaimed himself president, repealed the constitution and dissolved parliament but promised elections within three years. In August 2013, he was formally appointed President by the National Transitional Council created by him, and in September of that year he decided that Séléka should be dissolved. Former members of the rebel movement, however, continued their attacks on the civilian population. In response, several militias were formed called anti-balaka (‘anti-machete’). Both sides have been guilty of serious abuse.

The conflict has further sharpened the contradictions between the country’s Muslims, associated with Séléka, and the Christian population. At the end of 2013, about 1 million people were estimated to be on the run, and around half the population was estimated to be dependent on emergency aid. In January 2014, President Djotodia and Prime Minister Nicolas Tiangaye resigned following pressure from, among others, the Central African Cooperation Organization ECCAS. The same month, the National Transitional Council voted in favor of Bangui Mayor Catherine Samba-Panza as interim president. However, the violence continued and the UN Security Council mandated the EU to send a peacekeeping force to reinforce troops from, for example, the African Union and France already in the country.

Material law has French law as a model, but local custom also plays an important role. At the top of the court organization is the Supreme Court and the Criminal Court in the capital. The death penalty remains in the penal code but is de facto abolished in 1981.

After ten years in power, President François Bozizé was overthrown in a coup d’etat March 24, 2013 (see State of affairs and politics). The rebel coalition Séléka, which carried out the coup, was formed in the northeastern part of the country, a region in which President Bozizé’s armed forces have committed several human rights violations. Since the coup in 2013, Séléka has also abused the civilian population through looting, summary executions, rape and torture.

The rebel leader Michel Djotodia took office as president on August 18, 2013. A month later, he decided to disband Séléka while incorporating several of the rebels into the new army.

Over the years, the government forces, the presidential guard, the police and the various rebel groups have been guilty of illegal executions, ill-treatment, house-burning, blackmail and recruitment and use of children as soldiers. Torture and other inhuman treatment is prohibited by law, but the law is not complied with. Impunity is particularly widespread for crimes committed by government forces or the presidential guard. In 2010, a UN report found that in practice, there is no protection of the civilian population outside the capital Bangui and that up to a quarter of the population in the northern part of the country still lives in very difficult conditions.

In the country’s prisons, torture and abuse are common and there is only a separate prison for women. In the remaining prisons, men and women share the space.

Freedom of speech and media is guaranteed in the constitution, but the journalist corps in the country is corrupt, underpaid and practices self-censorship. Threats and harassment of journalists are common. In Reporters Without Borders Press Freedom Index for 2015, the country was ranked 110 out of 180 countries surveyed.

The position of women is weak. The constitution guarantees equal rights but is not complied with. During the civil war of 2002–03 (see History), women were systematically raped and killed as part of the war, and many have been infected and left by their husbands in connection with abuse.

Child soldiers are common among both government forces and rebel groups. Child abuse is prohibited but is common.

Homosexuality is prohibited by law.