According to Countryaah.com, with capital city of Yaounde, Cameroon is a country located in Central Africa with total population of 26,545,874. 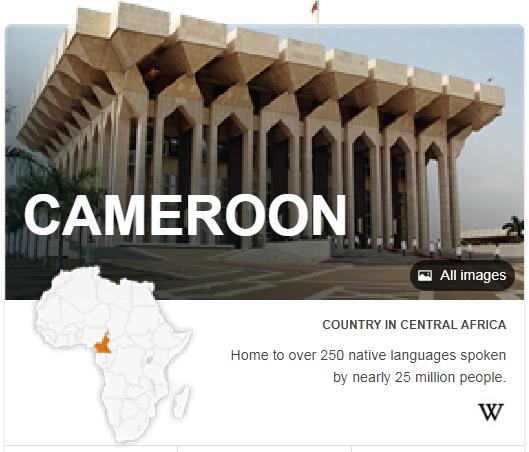 Cameroon has since 1990 formally been a democratic multi-party state with English and French as official languages. However, the same party has been in office since the 1970s and Paul Biya has been president since 1982.

The Cameroon constitution was adopted in 1972 and later received a number of additions. See ABBREVIATIONFINDER for how CM can stand for Cameroon. The president is the head of state and head of government and is elected by universal suffrage for seven years. The president appoints the ministers and is the commander-in-chief of the army. In 2008, the rules were changed to allow the president to sit for an unlimited number of terms. At the same time, the head of state became immune from prosecution following a possible departure.

The National Assembly, which establishes laws, has 180 members and is elected in general elections for five years. A constitutional supplement in 1996 introduced a Senate, a Supreme Legal Council, a Council of Ministers and a highest authority for public servants. However, the first Senate elections were held only in 2013. The Senate consists of 100 members, ten from each region. Of these, 70 are elected by indirect elections at the regional level while the other 30 are appointed by the president.

Paul Biya, who has been prime minister since 1975, succeeded Ahmadou Ahidjo in 1982 as president. Biya won the presidential election in 1984, was re-elected without a counter candidate in 1988 and has been re-elected five times since the introduction of the multi-party system in 1990, most recently in 2018 (with 71 percent of the vote). The French-speaking Biya has the strongest support in the French-speaking parts of the country, while his legitimacy in the English-speaking regions has been eroded.

Biya is the chairman of the former (1972–90) only allowed party Rassemblement démocratique du peuple camerounais (RDPC), which until 1985 was called the Union de population camerounaises (UPC). RDPC is still a government party and since the first multi-party in 1992 has strengthened its grip on power. In 2007, the party received 153 out of 180 seats in the National Assembly and in 2013 148 seats. Of the 180 members, 56 (31 percent) were women after the 2013 election.

In the first election to the new Senate in 2013, the RDPC received 56 out of 70 eligible seats, against 14 for the main opposition party Social Democratic Front (SDF), which since John Founder Ndi (born 1941) since its inception in 1990. In the 2013 elections, SDF received 18 seats in the National Assembly, where another five parties are represented. The 2018 parliamentary elections were postponed with the argument that it would be too difficult to implement this at the same time as the presidential election.

There are several hundred political parties registered in Cameroon, but only a few have run in any of the elections since 1992. Voting turnout among voters is generally relatively low, especially in the English-speaking Northwest Region and Southwest Region, where only 5 and 15 percent, respectively. of those entitled to vote took part in the 2018 presidential election. In these parts of the country, the demands for increased self-government have grown stronger in recent years.

The country’s legal inheritance consists of both English- and French-inspired rules from the colonial era, to which, following the Independence Day, domestic legislation and extensive complexes of customary rules are added. The death penalty remains in the legislation but is de facto abolished in 1997.

* 1960-61 President of Eastern Cameroon (formerly French Cameroon), then of the Federal Republic of Cameroon.