According to Countryaah.com, with capital city of Phnom Penh, Cambodia is a country located in Southeastern Asia with total population of 16,718,976. 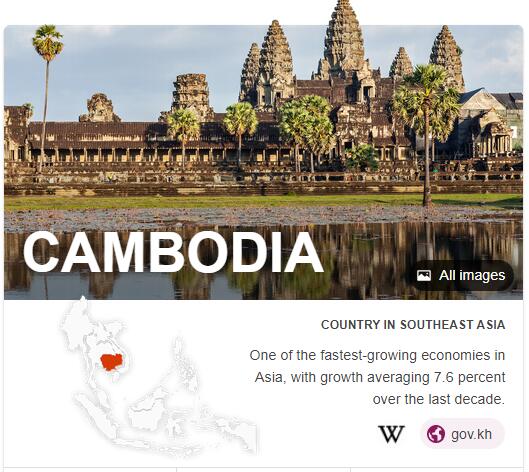 Following the brutal rule of the Red Khmer in 1975-79 (Democratic Kampuchea), a communist regime took power (Kampuchea People’s Republic). Since 1989, the country is again called Cambodia. The reformed Communist Party, the Cambodian People’s Party, still governs the country under the leadership of Hun Sen, Prime Minister since 1985.

Cambodia’s constitution was adopted in September 1993, as an end point in the UN-led peace process in the country. See ABBREVIATIONFINDER for how KH can stand for Cambodia. Cambodia thus became a monarchy again; formally the Kingdom of Cambodia. The king is thus head of state and no laws can come into force without his signature. Otherwise, the monarch’s role is essentially symbolic. Cambodia is an election monarchy: the king has no right to appoint his own successor.

The executive power is held by the government headed by a prime minister. The head of state orders the largest party to form a government, which must then be approved by Parliament. According to the Constitution, the judiciary must be independent.

According to the constitution, Cambodia is a “liberal democracy”. The Constitution is generally regarded as progressive, with an unusually clear focus on the protection of human rights according to Asian conditions. However, democracy has had a hard time rooting in the violence-ravaged country and Cambodia has not been able to live up to its rights-focused constitution. Cambodia’s institutions have not been modernized at the pace required to turn the country into a Western-style democracy. The state apparatus would need to be strengthened and streamlined, the army shrunk and the justice system cleansed from corruption and political control. Gender equality has far from been achieved.

After the May 1993 election and the entry into force of the Constitution, the country was governed by a system where two dominant parties, the Royalist FUNCINPEC (Front Uni National pour un Cambodge Independent, Neutre, Pacifique, et Coop谷ratif, ‘United National Front for an Independent, Neutral, Peaceful and Cooperative Cambodia ‘) and the Cambodian People’s Party (often abbreviated CPP according to the English name form) shared the state leadership among themselves. Thus, Cambodia had two prime ministers; Prince Norodom Ranariddh (born 1944)) was the first prime minister and Hun Sen the second prime minister. The aim was to gradually integrate the country but instead the system led to increasing friction. In the summer of 1997, Ranariddh fled to Thailand in connection with an armed confrontation between the armed forces of the parties.

After the next election in 1998, Hun Sen became sole prime minister. In this election, a newly formed party founded by a defender from FUNCIPEC, Sam Rainsy (born 1949), under the name Sam Rainsy’s party (SRP), had emerged as one of the three central political actors. In 2003, CPP again became the largest party in a contested election. After tough negotiations, government cooperation between CPP and FUNCINPEC continued, but its role was gradually marginalized. The party was weakened by internal divisions. Another reason for its decline was that the monarch Norodom Sihanouk, whose special and long-standing role in Cambodia’s political backdrop was the reason for the monarchy being reintroduced, became ill, abdicated and succeeded in 2004 by his son Norodom Sihamoni.

In the 2008 election, SRP took over the role of leading opposition party while CPP won by about 60 percent of the vote. Prior to the 2013 election, SRP merged with another opposition party and formed Cambodia’s National Rescue Party (CNRP). Despite the fact that Sam Rainsy himself was prevented from running for office, the party received 55 of the parliament’s mandate – a palpable decline for the CPP, which backed from 90 to 68 seats.

In November 2017, CNRP was dissolved by Cambodia’s highest court after the party was accused of conspiring against the government. The verdict was seen as political and part of Hun Sen’s efforts to eliminate its political opponents. As a result, the elections were held in July 2018 without opposition and the CPP won all 125 seats in the National Assembly, while the party controlled 58 of the 62 seats in the Senate. After the election, 20 percent of the members of the National Assembly were women. Despite the lack of options to choose from, a turnout of more than 80 percent was reported.

Cambodia has in practice been transformed into a one-party state. Political power has been centralized and the regular opposition silenced, as have critical voices in civil society. Hun Sen has developed a strong grip on the security forces and supplemented them with a personal security force that can compete with the country’s army. In a report from Human Rights Watch in June 2018, Hun Sen was equated with a “full-fledged military dictator”.

When Cambodia became independent, it continued to apply the French-inspired right introduced during the colonial era. However, the Pol Pot regime liquidated both the entire legal world and almost all the country’s lawyers. At present, great efforts are being made to re-establish the justice system in accordance with Western role models, but the political and military situation prevents the legal system from functioning. The death penalty was abolished in 1989.

Free elections were held again in Cambodia during the 1990s and in conjunction with Pol Pot’s death in 1998, the country was considered to have peace for the first time in 30 years. But despite the collapse of the Red Khmer, much work remains to be done to develop respect for human rights.

The biggest human rights problems in Cambodia are an ineffective legal system, restrictions on freedom of the press and the situation of the country’s interns. A widespread corruption within the legislative as well as the judiciary causes few Cambodians to feel equality before the law.

Serious deficiencies in press freedom are noted in Reporters Without Borders Press Freedom Index for 2014 where Cambodia places 144th out of 180 countries. A few years earlier, the country was in position 85. The Ether media is generally controlled by the government and the military, and regime-critical Cambodian journalists have on most occasions been detained or even murdered.

Reports from human rights organizations show that the conditions in the country’s prisons are far from meeting international standards. Overcrowding and lack of both drugs and food and water contribute to malnutrition and diseases. Security is low and, overall, the situation for the country’s internals is directly life threatening. Although the Constitution prohibits torture and other degrading treatment, credible reports testify that military, police and prison guards have on several occasions practiced both mental and physical torture of suspects and interns.

In addition to these problems, human trafficking is also extensive. The most serious is the situation for the children, as trafficking in minors for sexual exploitation is said to increase every year.