According to Countryaah.com, with capital city of Sofia, Bulgaria is a country located in Eastern Europe with total population of 6,948,456. 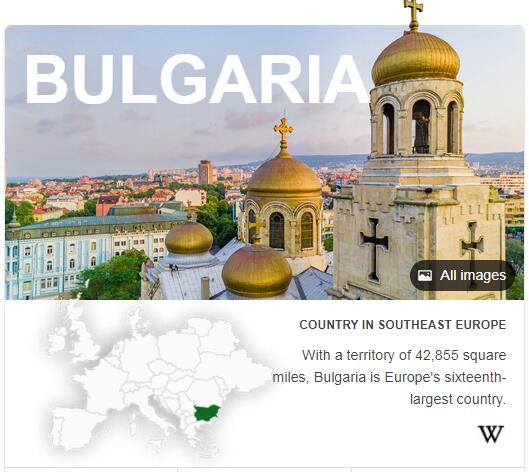 See ABBREVIATIONFINDER for how BG can stand for Bulgaria. Since 1913, the Bulgarian government had abandoned traditional pro-Russian policy and made approximations to Germany. Despite the victories over Serbia, the population at the outbreak of the First World War did not agree with the politics of the war. Ferdinand surrendered to the Allies in 1918 and abdicated in favor of his son, Boris.

The Bulgarians were disarmed and, in addition to the loss of territories, were forced to pay compensation. In the 1920 elections, which had reinstated the Constitution of 1878, the popular reaction to the war led to an absolute majority for the Agricultural Party. The government instituted agricultural reform, which was a replica of Soviet Russia, even though the Bulgarian communists were still being persecuted.

Bulgaria joined the League of Nations and stood for a reconciliation policy, but the lost territories in conjunction with the pressure that came from the Bulgarian residents abroad led to renewed tensions with the neighbors. The peasant leader and the head of government, Aleksandur Stamboliyski, was deposed and murdered by a conspiracy between Macedonians and people from the Bulgarian opposition.

Aleksandur Tsankov took over the government as leader of a party coalition that excluded liberals, communists and peasants. Uprising and armed uprising by the opposition led to hundreds of executions and killings. The government decreed the state of emergency and reinforced the army in an effort to prevent a popular uprising.

Tsankov resigned in favor of the leader of the Democratic Party, Andrei Liapchev, in 1926, thus giving way to a more liberal policy. The government introduced a general amnesty and allowed the recovery of the Agricultural Party. In 1932, Liapchev’s government included members of the Democratic Party, the Liberal Party and the Agricultural Party, in the so-called National Bloc.

Fearing the effects of the international economic crisis and encouraged by the country’s neighbors, Boris III supported the conservative group, Zveno’s attempt to oust Liapchev and impose a dictatorship that banned all political parties, instituted press censorship, closed universities and formed a right-wing extremist youth movement.

Tensions between Bulgaria and Turkey were reduced and in 1937 a peace agreement with Yugoslavia was signed. The following year, a non-attack agreement was signed with the Balkan Alliance, which required Bulgaria to disarm its army. At the same time as the king was re-approaching Germany, the Bulgarian hopes of regaining the lost areas were aroused.

But Bulgaria declined to declare war on the Soviet Union. King Boris was assassinated and a new pro-German government formed. The anti-Nazi resistance that was reinforced by the communists led to the formation of the Patriotic Front in 1942, which included the participation of Republicans, leftist peasants, Democrats and independents.

Paralyzed by the civil war, the German government leader Boshilov resigned in May 1944 and was replaced by Bagrianov, who sought to reach an agreement with the Allies while Soviet troops advanced toward the Danube. In August, Bulgaria declared itself neutral and decreed the disarmament of the German troops occupying the region.