According to Countryaah.com, with capital city of Porto-Novo, Benin is a country located in Western Africa with total population of 12,123,211. 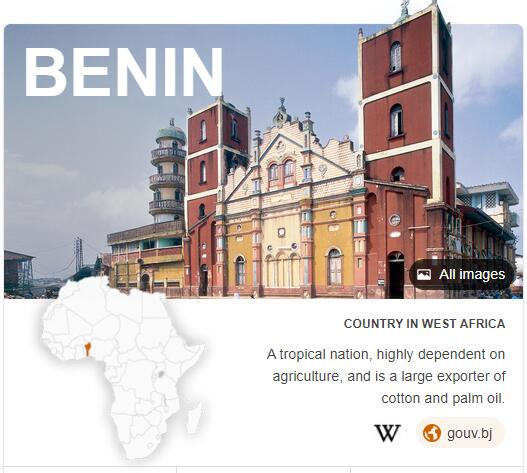 In July 2012, Benin signed the second Additional Protocol to the International Covenant on Civil and Political Rights. It was seen as an important step to completely eliminate the death penalty from the country’s criminal law. The scale of human rights violations in the country is low compared to other African countries. However, the country’s prisons are heavily overcrowded. For example, the prison in Cotonou had. 6 times more prisoners than it was built for. Finally, the state is sensitive to criticism, and intervenes frequently on it. In September 2012, the private TV channel Canal 3 was closed for a few days, following one of President Yayi’s former advisers,Lionel Agbo had accused the president of corruption. The state apologized that Canal 3 had failed to comply with the transmission guidelines. Agbo was accused of insulting the head of state. In January 2013, he was sentenced to 6 months in prison, but subsequently chose to flee to France. See ABBREVIATIONFINDER for how BN can stand for Benin.

The BBC announced in October 2012 that the president’s doctor, niece and former minister of commerce had been arrested for trying to poison the president. Niecen should have replaced the president’s medicine with a “dangerous substance” during his state visit to Belgium.

In December 2014, the United States Department of Labor published a list of countries employing child labor. Benin was on this list of 74 countries for the use of children in cotton production and the production of crushed granite.

In April 2015, parliamentary elections were held. The FCBE coalition consisting of 50 smaller parties supporting President Boni Ayai became the largest group in parliament with 33 out of 83 seats. However, Parliament elected his opponent Adrien Houngbédji as chairman. The state of Cotonou had been characterized by political tensions during the period leading up to the elections, and they continued afterwards. In May, the Interior Minister banned all demonstrations until a new government was formed. The president notified the opposition vice-president Armand-Marie Candide Azannaï for slander. An attempt to arrest this triggered clash between protesters, police and soldiers in Cotonou. The demonstration was dissolved by tear gas and about 10 were injured. More than 20 were arrested and charged with rioting, vandalism and violence. The demonstrations then spread to other cities in the country.

In June, President Boni appointed Lionel Zinsou for the post of Prime Minister. The post is not stipulated in the country’s constitution from 1990, and most of the period since then there has been no prime minister. Observers pointed out that the likely explanation was the president’s desire to put his successor in office. Boni’s tenure ended in March 2016, and he was hampered by the constitution in the re-election. As expected, Zinsou announced his candidacy for the presidential post in December 2015. He escaped a helicopter emergency landing at one stage in the northern part of the country at the end of the month with no injuries.

The March presidential election was won by independent candidate Patrice Talon with 65.4% of the vote against 34.6% for Lionel Zinsou. Zinsou had won the first round of voting with 28.4% of the vote against 24.7% for Talon, but Talon managed to get almost all the votes that had gone to other candidates in the first round. Talon declared at his deployment that he would work for a constitutional amendment so that presidents were limited to one 5-year term, reduce the size of the government from 28 to 16 ministers, and fight “complacency.” However, after a few days, the president’s proposal for constitutional amendment was voted down in parliament. He needed 63 votes, but only got 60. It was unclear if he would run for re-election in 2021.

Despite the election of new president, police and security forces continued to crack down on protesters. In July 2016, security forces attacked a peaceful student demonstration in Cotonou with tear gas and lace. 20 students were injured. At least 9 students were subsequently jailed and released only after several weeks. Twenty-one students who participated in the demonstration were banned from the university for 5 years, and in August, the university decided to cancel the academic year for the students at the faculty from which most protesters came. In October, the Council of Ministers banned all student activities on the country’s campus.