According to Countryaah.com, with capital city of Brussels, Belgium is a country located in Western Europe with total population of 11,589,634. 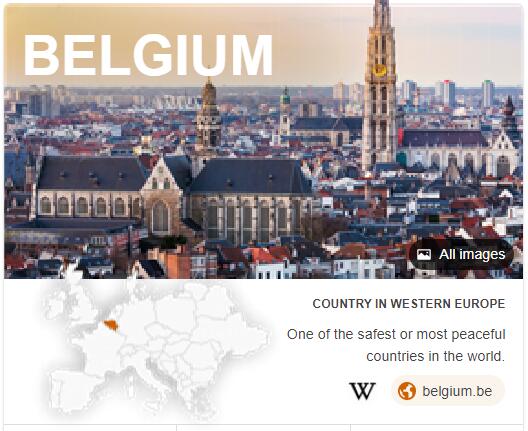 Belgium is a constitutional monarchy with a federal and parliamentary system. See ABBREVIATIONFINDER for how BE can stand for Belgium. General voting rights for men were introduced in 1919, while women had to wait until 1948, when the country can be considered to have become fully democratic.

The monarch – since 2013 King Philippe – is the country’s head of state and the office has since 1991 inherited the eldest child regardless of gender. The head of state’s powers of authority are great on paper, but in practice extremely limited. However, through its role as guarantor of the country’s sovereignty and unity, it can play an important role in keeping the country together and countering separatism.

Power in the country is divided at federal level between the two chambers of parliament, the government and the Constitutional Court, as well as between the federal level and the country’s three regions: Flanders, Wallonia and bilingual Brussels, which have directly elected parliaments and governments. In addition, there are selected bodies for the three linguistic areas: the Flemish, the French and the German, whose powers concern linguistic issues in, for example, the cultural and educational fields.

Common Belgian issues decided in the Federal Parliament are foreign policy, defense, currency and fiscal policy, the judiciary and law and order enforcement, while the regions are responsible for education, labor and industrial policy, environmental and energy issues and transport. Of the national budget, 40 percent is transferred to the regions, which corresponds to about 80 percent of the regions’ revenue.

The 150 members of the House of Representatives are elected in direct elections of five years through a proportional electoral system with a five percent block against small parties. Since 2014, the Senate’s 60 members have been appointed indirectly by the local and regional assemblies. The voting age is 18 and the eligibility age is 21 and voting rules prevail.

The House of Representatives is the more powerful of the two. It is up to this that the government is responsible and in certain matters it has sole decision-making power, for example with regard to the state budget. In the vast majority of cases, the Senate has the opportunity to comment, but the final decision is in the House of Representatives. However, with regard to, for example, constitutional issues and the division of the country, the approval of both chambers is required. Furthermore, in important issues, a majority is required within both language groups, which makes the decision-making process slow.

The executive is exercised by the government, which according to the constitution must contain as many Flemish speakers as French-speaking ministers.

The Constitutional Court, which consists of twelve members, can repeal laws that it considers contravene the country’s constitution.

In addition to the regional and language-based parishes, there are also direct elections to the country’s ten provinces and 589 municipalities.

The linguistic distinction characterizes not only the political institutions but also the political parties. The political parties are regionally based, which means that there are dual sets of all parties; a French-language only found in the French-speaking parts and a Flemish only found in Flanders. More recently, contradictions between the language groups have increased, making it even more difficult than before to form a government because language or regional affiliation has gained precedence over ideological affiliation. Simply put, it can be said that the Flemish parties advocate more autonomy for the regions or, in some cases, even full independence, since they consider that excessive resources go to poorer Wallonia, while the French-speaking parties want to maintain the current order.

The Belgian party system is very fragmented and there are really no large parties. Since 1985, very few parties have received more than 20 percent of the vote and the number of parties in Parliament has been around twelve.

The largest party groups have traditionally been the Christian Democratic CD&V (Christian Democratic and Flemish) in Flanders and the CDH (Center démocrate humaniste) in Wallonia, the Socialist or Social Democratic SP.A (Socialist Party. Anders) and PS (Parti Socialiste) and the Liberals. Open VLD (Open Flemish Liberals and Democrats) and MR (Movement Reformer) respectively. These parties have participated in various constellations in governments throughout the post-war period, but almost always with the Christian Democrats at the forefront. In the 1980s, two green parties also established themselves (Agalev and Ecolo), which during the period 1999–2003 joined the government. In recent decades, more separatist-oriented parties have gained greater influence, especially in Flanders, for example the anti-immigrant hostile Vlaams Belang (formerly the Vlaams Bloc). In the 2014 election, however, Vlaams Belang lost nine of its previous twelve seats in the House of Representatives.

In the 2010 election, the nationalist and separatist New Flemish Alliance (Nieuw-Vlaamse Alliantie, N-VA) became the largest party with just over 17 percent of the vote. N-VA leader Bart De Wever (born 1970) was commissioned to form a new government, but failed. Nor did the French-speaking socialist leader Elio Di Rupo (born 1951) succeed in forming a stable government coalition, after which a prolonged government crisis occurred. Not until December 2011 did socialist Di Rupo succeed in forming a new government, with ministers from six parties. The government crisis had lasted for a year and a half.

In the May 2014 elections, N-VA increased further and received just over 20 percent of the vote. Bart De Wever was again given the task of forming a government. De Wevers initiated government talks with CD&V, CDH and MR. However, the negotiations fell after CDH declined government cooperation with N-VA. The mission to form a new government in Belgium then went to Liberal MR Charles Michel (born 1975). After lengthy negotiations, Michel succeeded in October 2014 to form a government consisting of CD&V, Open VLD and N-VA. It is the first time in the country’s history that a separatist party (N-VA) is part of a government.

N-VA left the government in December 2018 due to disagreement on the migration issue. Michel tried to get support in Parliament for a minority government but was forced to resign after losing a vote of confidence; however, he was commissioned by the king to lead a transitional government with limited powers until a new government with parliamentary support could take office.