According to Countryaah.com, with capital city of Nassau, Bahamas is a country located in North America with total population of 393,255. 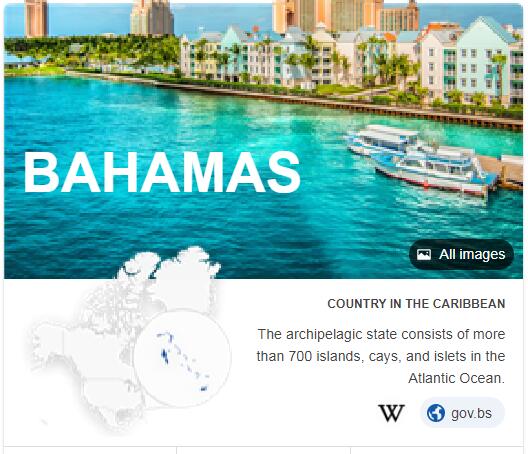 The Bahamas is an independent member of the Commonwealth. See ABBREVIATIONFINDER for how BS can stand for Bahamas. The British monarch is the head of state and is represented by a Bahamian general governor, appointed on a proposal by the country’s prime minister. Parliament consists of a Senate whose 16 members are appointed by the Governor-General in consultation with the Prime Minister and the Opposition Leader, and a House of Representatives whose 39 members are elected in general elections. Parliament’s term of office is a maximum of five years.

Bahamas policy is completely dominated by two parties, the Progressive Liberal Party (PLP) and the Free National Movement (FNM), both of which can be placed at the center of the political scale. PLP’s Lynden O. Pindling was Prime Minister 1967–92. The country then experienced economic growth but was also characterized by corruption and extensive drug smuggling. In 1992, the FNM won the election, and party leader Hubert Ingraham formed the government. After two terms in opposition, PLP, now led by Perry Christie, resumed government power in 2002. In 2007, FNM and Ingraham resumed government power, in 2012 to lose it again to PLP and Christie.

After the 2017 elections, a new shift in power took place and FNM’s party leader Hubert Minnis became prime minister. Five (13 percent) of the members of the House of Representatives were then women.

The legal order in the Bahamas is based almost entirely on English law. The judicial organization consists mainly of magistrates’ courts and the Supreme Court. The death penalty can be punished for some serious crimes.

Human rights are curtailed in many ways in the country. Violence and sexual abuse against women and children occur. Legal protection does not include rape in marriage, and despite promises to change the law to include perpetrators who are married to the person who is sexually abusive, no such was approved by the end of 2015.

Harassment of LGBTQ people, as well as threats and discrimination against HIV-infected individuals. Under Bahamian law, there is no sanction for a person who discriminates against a person because of his or her sexual orientation or gender identity. The Constitution prohibits racial discrimination and discrimination based on provenance, but in practice the legal community works poorly for refugees and asylum seekers. Haitian descent people are particularly vulnerable and many asylum seekers have been denied probation, which goes against human rights, and is immediately re-expelled.

The police overwhelm is widespread and has led to the deaths of citizens being beaten to death. The judiciary is substandard and lacks resources at the same time as the country’s crime statistics are alarming. In 2014 and 2015, several demonstrations took place with a view to restoring the death penalty, which, although there is but has not been enforced since 2000, which can be seen as the population is desperate to get the government to deal with the country’s crime and create a society with a functioning justice.