According to Countryaah.com, with capital city of Vienna, Austria is a country located in Western Europe with total population of 9,006,409. 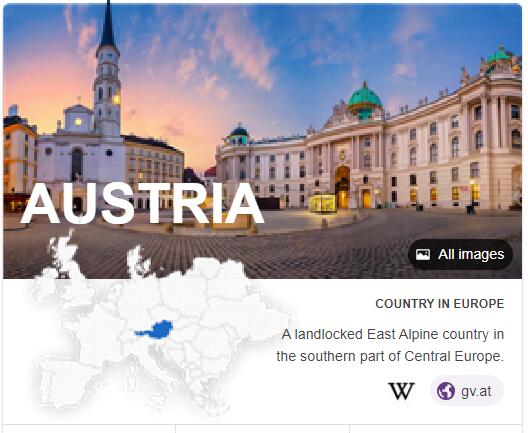 Austria is a federal republic with nine states (countries), each of which has its own parliament and government. The Head of State, who holds the title of Federal President, is elected for a term of six years and may be re-elected once. See ABBREVIATIONFINDER for how AT can stand for Austria.

The power of the president is primarily ceremonial, but the constitution also allows the president to appoint government leaders and a number of other government officials and, in some circumstances, dissolve parliament and announce new elections.

At the federal level, the legislative power is held by a two-chamber parliament, where the 183 members of the National Council are elected for a term of five years. For representation in the National Council there is a 4 percent block. The nine state parliaments elect 61 members of the Federal Council. Their task is, often in clear competition with the federal parliament and the government, to represent the interests of the states. The states have relatively far-reaching self-government, but their right to veto is weak and gradually more and more economic and political influence has accumulated at the federal level.

In the second half of the 20th century, Austrian party politics was dominated by two major parties: the bourgeois People’s Party (Österreichische Volkspartei, ÖVP), with strong ties to business, industrial and agricultural interests, and the Social Democrats (Sozialdemokratische Partei Österreichs, SPÖ), with links to trade unions and other interest organizations.

For a long time, the political system showed high stability and voter mobility was low. OVP and SPÖ formed coalition governments on several occasions. Through the so-called proportionate system, political and administrative positions were distributed for a long time between the candidates of both parties.

During the 1990s, support for the ÖVP and the SPÖ declined, and the populist and EU-critical Austrian Freedom Party (Freiheitliche Partei Österreichs, FPÖ) achieved great success in both national and state elections. This was mainly the expression of a growing dissatisfaction with the propor- tion system and an increasing resistance to immigration. After the 1999 election to the National Council, which became a hardship for both ÖVP and SPÖ but a success for FPÖ, ÖVP government formed together with FPÖ.

The government’s policy led to several crises and, in some cases, strong international criticism, which focused mainly on FPÖ and its controversial leader Jörg Haider. The EU even imposed sanctions against Austria for a few months due to the FPÖ’s place in the government. The loosely cohesive party, in office, became increasingly difficult to retain voter support and in 2005 the party split. Haider formed the new party for the future of Austria (Bündnis Zukun Österreich, BZÖ), with a somewhat dimmed political profile.

In opposition, the Social Democrats developed a program that is broadly similar to those of the Nordic Social Democratic parties, with investments in welfare issues and social security. At the 2006 election, the party became the largest party in the National Council and again formed government with the ÖVP. However, the contradictions between the coalition parties were clear from the outset and new elections had to be announced as early as September 2008. The election results confirmed that ÖVP and SPÖ lost large parts of their voter support; both parties made their worst choices so far in the post-war period.

Things went better for both populist parties FPÖ and BZÖ. The Greens (Die Grünen), which has emerged as an alternative party for young voters since the 1980s, achieved their best result to date. The voter streams could be partly explained by the fact that the voting age in 2007 was lowered from 18 to 16 years. SPÖ refused to cooperate with FPÖ and BZÖ and again formed a coalition government with ÖVP. Federal Chancellor became the SPÖ leader Werner Faymann (born 1960).

The contradictions between the government parties became clear in many issues and the citizens also showed dissatisfaction with the economic and social policies pursued. At the same time, a series of scandals shook both SPÖ and ÖVP. Jörg Haider died in a traffic accident shortly after the election, which became the beginning of a period of increased contradictions within BZÖ.

In the 2013 National Council elections, both SPÖ and ÖVP listed new bottom listings, although they remained the largest parties. Both FPÖ and the Greens went ahead while the election became a disaster for BZÖ, which lost all its mandates. Some former BZÖ voters gave their vote to Team Stronach für Österreich (TS), a party formed by an aged industrialist who returned to Austria after 60 years in Canada. The party was attracted mainly because of harsh criticism of the Eurosystem and received just under 6 percent of the vote and eleven seats. The newly formed party Das Neue Österreich (NEOS), which is described as liberal and EU-positive, also made a surprisingly good choice, reaching a 5 percent vote, giving nine seats.

SPÖ and ÖVP continued their coalition co-operation with Faymann as Chancellor, but from the outset problems arose in the formulation of government policy. For a long time, there has been a split between city and countryside in Austrian politics. This has been accentuated in recent years, mainly through increased contradictions in the view of immigration. The government coalition between SPÖ and ÖVP first took a very liberal stance on this issue, causing increasing dissatisfaction among large groups of voters, mainly in rural areas. Later, Faymann launched a completely opposite line, and the government’s faltering on the issue provided additional fuel to the debate ahead of the election of a new federal president in early 2016.

In the first round of the presidential election, the surprising result was that FPÖ’s candidate, Norbert Hofer (born 1971), received the most votes. Hofer was strongly critical of the government’s immigration policy and promised to pursue political and constitutional issues in a way that previous presidents did not. Two came Alexander Van der Bellen, supported by the Greens. Only the fourth and fifth place came the candidates launched by ÖVP and SPÖ.

In the midst of the final phase of the presidential campaign, Faymann resigned from both the government post and as party leader. He was succeeded in both positions by Christian Kern (born 1966).

The second round of elections in May 2016 resulted in a very tight victory for Van der Bellen. However, the election was annulled by the Constitutional Court following allegations that, among other things, postal votes were counted prematurely. In the new election held in December, Van der Bellen won again. When he took office in January 2017, he became the country’s first president after the Second World War from a party other than ÖVP and SPÖ.

Contradictions within the ruling SPÖ-ÖVP coalition in the spring of 2017 led to ÖVP leaving the government. At the same time, the ÖVP party leader resigned and the unusually young Foreign Minister Sebastian Kurz took over the leadership.

In December 2017, ÖVP and FPÖ formed government for the third time, now under the leadership of Sebastian Kurz, who thus became Austria’s youngest alliance Chancellor. The government program included proposals for increased support for business, tax cuts and limited immigration, a profile issue for both parties.

In May 2019, a German film was released in German media of a 2017 conversation between, among others, FPÖ’s party leader Heinz-Christian Strache (born 1969) and a woman who claimed to be related to a Russian oligarch. The parties discussed how FPÖ could be supported in the upcoming election against promises of future state business contracts, and how to take control of the Austrian evening newspaper Kronenzeitung to get rid of critical journalists.

The scandal led Strache to resign as vice-chancellor and party leader. Chancellor Kurz announced that all cooperation between ÖVP and FPÖ would cease. New elections were announced until September 2019. A little over a week after the disclosure, FPÖ’s Interior Minister Herbert Kickl (born 1968) was fired, and all FPÖ ministers left the government in protest. Subsequently, Kurz and his government were deposed by a vote of no confidence in Parliament.

From June 2019 until the new government was in place, the country was ruled for the first time by a technocrat government led by the chairman of the Supreme Court Brigitte Bierlein (born 1949). Bierlein also became the first female head of government in Austria.

Despite the scandal that toppled the Kurz government, ÖVP in the following election held in September 2019 received the best result since the 2000 elections. Also ahead, like green parties in a number of other European countries, was the Green Party (Die Grünen), which received about 13.9 percent of the vote. The party, which ended up in the 2017 election, went from 0 to 26 seats. Liberal and EU-friendly party NEO (Das Neue Österreich und Liberales Forum)) also went forward: from 10 to 15 seats. NEO thus became the fifth largest party in the Austrian National Council. Both the right-wing nationalist FPÖ, which had previously ruled together with Kurz ÖVP, and the Social Democratic SPÖ backed down. FPÖ lost almost half of its mandate.

After long negotiations, ÖVP and the Greens reached a joint political program. The cooperation between the Green Party and ÖVP was surprising in many respects, mainly because of their different views on migration and asylum issues.

However, alliances between conservative and green parties have also been discussed in other countries in recent years. The fact that the parties formed government together can be explained by several factors, but above all by a government program where the parties, instead of compromising on common answers to controversial questions, divided the questions between themselves. For example, the Greens were given influence over the climate policy issues.

ÖVP has thus ruled the country since 1986 with the exception of 2019 when the country was ruled by a technocrat government.

1 One of the SPÖ’s mandates, through election-technical cooperation, came to the party Liberales Forum, which in 2014 merged with NEOS.

The legal order in Austria is codified, including a civil law (Allgemeines Bürgerliches Lawbuch) from 1811, a commercial law and a civil process law. The judicial system consists mainly of district courts for small cases (Bezirksgerichte), General Court of First Instance (Landesgerichte), Court of Appeal (Oberlandesgerichte), and the Supreme Court (Oberster Gerichtshof). The legal order in Austria is affected by its membership in the EU. The death penalty was abolished in 1968; the last execution took place in 1950.