According to Countryaah.com, with capital city of Tirana, Albania is a country located in Southern Europe with total population of 2,877,808. 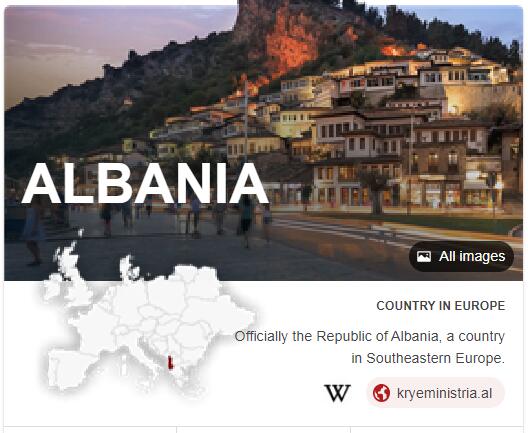 See ABBREVIATIONFINDER for how AL can stand for Albania.

From 1479 to 1912 Albania was part of the Turkish Empire. The Albanian people’s national freedom struggle started later than any other people within the European part of the empire. Immediately before the Berlin Congress in 1878, which was to establish Turkey’s European borders after the war with Russia, Albanian nationalists formed a federation, the Prizren League – for the preservation of a united Albania within the empire. The Prizren League, which the Turks had originally regarded as a support in the fight for the maintenance of the empire’s holdings in Europe, quickly developed into an organization which itself absorbed the Albanian national currents. In 1881, the Turks disbanded the league and arrested its leaders. Three years later, it resumed business from Bucharest. At the beginning of this century, an Albanian anti-Turkish newspaper was published in Brussels, edited by Ismail Kemal Bey Vlora. During the First Balkan War of 1912, when the Turks were practically expelled from Europe, Ismail Kemal Bey Vlora proclaimed Albania independent.

With support predominantly from Austria-Hungary, an international commission before World War I drew Albania’s borders. The 1919 Versailles Peace Conference agreed that Albania should maintain its borders from 1913. This meant that the Kosovo area was not incorporated into Albania but became part of Yugoslavia. The incorporation of the Kosovo area has since been a constant target of Albanian nationalists and a source of contradictions between the two countries up to our day. The early 20’s were characterized by ever-changing governments and political turmoil. In 1925, with armed Yugoslav support, Ahmet Bey Zogu became president. Three years later he was proclaimed Zog 1st – king of the Albanians.

The overriding problem for Albania since the liberation of Turkey has been that it has not been a self-sustaining economic entity. In 1912 Albania was the most backward country in Europe. Agriculture was based on natural farming, and in bad years the country was unable to feed itself. Trade between the various regions hardly existed, and no industry existed. Albania was unable to accumulate capital that could be invested and contribute to economic growth. Therefore, throughout its independence period, Albania has been forced to turn to some superpower to obtain financial assistance to develop the country.

Albania tried to get financial help from the League of Nations, but this was refused. After Zogu became president in 1925, he turned to Italy for financial assistance. Italy and Albania entered into the years following a series of economic agreements. As a result, Italy was already dominating Albania both economically and politically in the late 20’s, and Mussolini was pushing for political concessions for his financial aid. After Italy had completed its campaigns in Ethiopia and Spain, Albania became occupied in 1939. Albania was made into an Italian province and a base for further expansion towards Greece. See a2zcamerablog.com for Albania tour plan.

King Zog – who reigned as dictator in 1925-39 – had made efforts to modernize the country. Blood revenge and polygamy were banned. Many Albanians were sent to Western Europe to study and the educational system improved. The economic progress that had taken place was due to Italian help. The Italians built 1200 km of roads and hundreds of bridges. Agriculture was modernized. But Italy did little to develop an independent Albanian industry. Italy was first and foremost interested in exploiting the natural resources that mattered to the military apparatus, e.g. oil resources. In 1938, industrial production accounted for only 4.4% of gross domestic product.